Enhanced Dissolution and Oral Bioavailability of Cyclosporine A: Microspheres Based on αβ-Cyclodextrins Polymers

Although glucocorticoids are highly effective in treating various types of inflammation such as skin disease, rheumatic disease, and allergic disease, their application have been seriously limited for their high incidence of side effects, particularly in long term treatment. To improve efficacy and reduce side effects, we encapsulated betamethasone phosphate (BSP) into biocompatible red blood cells (RBCs) and explored its long acting-effect. BSP was loaded into rat autologous erythrocytes by hypotonic preswelling method, and the loading amount was about 2.5 mg/mL cells. In vitro, BSP loaded RBCs (BSP-RBCs) presented similar morphology, osmotic fragility to native RBCs (NRBCs). After the loading process, the loaded cells can maintain around 70% of Na+/K+-ATPase activity of natural cells. In vivo, a series of tests including survival, pharmacokinetics, and anti-inflammatory effect were carried out to examine the long-acting effect of BSP-RBCs. The results shown that the loaded cells could circulate in plasma for over nine days, the release of BSP can last for over seven days and the anti-inflammatory effect can still be observed on day 5 after injection. Totally, BSP-loaded autologous erythrocytes seem to be a promising sustained releasing delivery system with long anti-inflammatory effect. View Full-Text
Keywords: red blood cells; drug delivery system; betamethasone phosphate; long anti-inflammation red blood cells; drug delivery system; betamethasone phosphate; long anti-inflammation
►▼ Show Figures 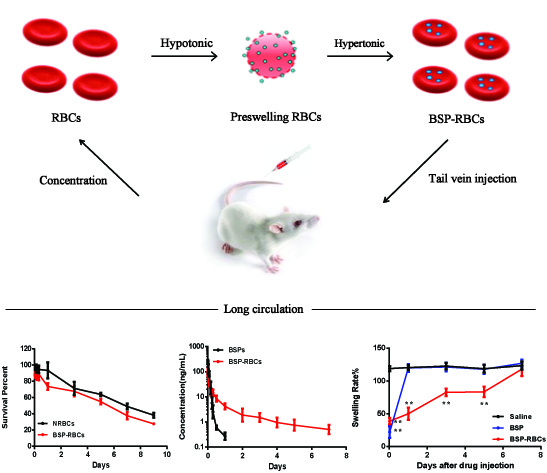