Type W Human Endogenous Retrovirus (HERV-W) Integrations and Their Mobilization by L1 Machinery: Contribution to the Human Transcriptome and Impact on the Host Physiopathology
Next Article in Special Issue

Phage-Phagocyte Interactions and Their Implications for Phage Application as Therapeutics

Characterization of Sinorhizobium sp. LM21 Prophages and Virus-Encoded DNA Methyltransferases in the Light of Comparative Genomic Analyses of the Sinorhizobial Virome

The genus Sinorhizobium/Ensifer mostly groups nitrogen-fixing bacteria that create root or stem nodules on leguminous plants and transform atmospheric nitrogen into ammonia, which improves the productivity of the plants. Although these biotechnologically-important bacteria are commonly found in various soil environments, little is known about their phages. In this study, the genome of Sinorhizobium sp. LM21 isolated from a heavy-metal-contaminated copper mine in Poland was investigated for the presence of prophages and DNA methyltransferase-encoding genes. In addition to the previously identified temperate phage, ΦLM21, and the phage-plasmid, pLM21S1, the analysis revealed the presence of three prophage regions. Moreover, four novel phage-encoded DNA methyltransferase (MTase) genes were identified and the enzymes were characterized. It was shown that two of the identified viral MTases methylated the same target sequence (GANTC) as cell cycle-regulated methyltransferase (CcrM) of the bacterial host strain, LM21. This discovery was recognized as an example of the evolutionary convergence between enzymes of sinorhizobial viruses and their host, which may play an important role in virus cycle. In the last part of the study, thorough comparative analyses of 31 sinorhizobial (pro)phages (including active sinorhizobial phages and novel putative prophages retrieved and manually re-annotated from Sinorhizobium spp. genomes) were performed. The networking analysis revealed the presence of highly conserved proteins (e.g., holins and endolysins) and a high diversity of viral integrases. The analysis also revealed a large number of viral DNA MTases, whose genes were frequently located within the predicted replication modules of analyzed prophages, which may suggest their important regulatory role. Summarizing, complex analysis of the phage protein similarity network enabled a new insight into overall sinorhizobial virome diversity. View Full-Text
Keywords: Sinorhizobium sp. LM21; Alphaproteobacteria; prophage; DNA methyltransferase; CcrM-like specificity Sinorhizobium sp. LM21; Alphaproteobacteria; prophage; DNA methyltransferase; CcrM-like specificity
►▼ Show Figures 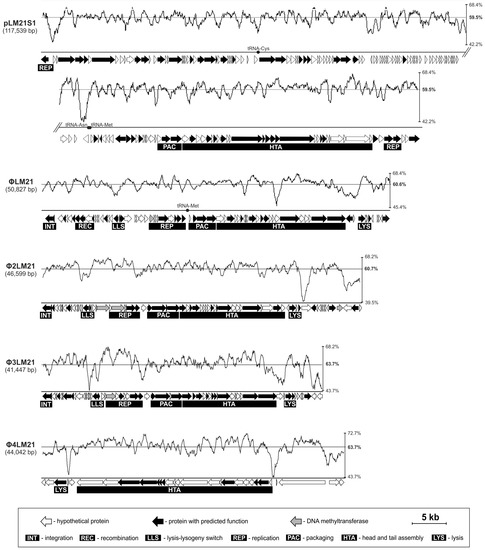