Poxvirus Exploitation of the Ubiquitin-Proteasome System
Previous Article in Journal

The type I interferon system plays a critical role in limiting the spread of viral infection. Viruses induce the production of interferon (IFN), which after binding to the IFN-α/β receptor (IFNAR), and triggering of the JAK/STAT signaling cascade, results in the induction of interferon-stimulated genes (ISGs). These ISGs function to inhibit viral replication and to regulate the host immune response. Among these ISGs, the ubiquitin-like molecule, ISG15, is one of the most strongly induced proteins. Similar to ubiquitin, through an IFN induced conjugation cascade, ISG15 is covalently linked to a variety of cellular proteins, suggesting regulation of different cellular processes. Studies performed over the past several years have shown that ISG15 plays a central role in the host’s antiviral response against many viruses. Mice lacking ISG15 display increased susceptibility to multiple viruses. Furthermore, several viruses have developed immune evasion strategies that directly target the ISG15 pathway. Work is now underway to determine the mechanism by which ISG15 functions as an antiviral molecule, such that therapies targeting this pathway can be developed in the future.
Keywords: ISG15; interferon; antiviral; ubiquitin-like molecule ISG15; interferon; antiviral; ubiquitin-like molecule
►▼ Show Figures 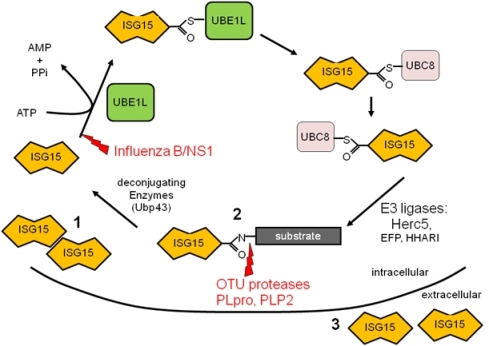