The Interplay between Viruses and Host DNA Sensors

Coronaviruses (CoVs) have caused several global outbreaks with relatively high mortality rates, including Middle East Respiratory Syndrome coronavirus (MERS)-CoV, which emerged in 2012, and Severe Acute Respiratory Syndrome (SARS)-CoV-1, which appeared in 2002. The recent emergence of SARS-CoV-2 highlights the need for immediate and greater understanding of the immune evasion mechanisms used by CoVs. Interferon (IFN)-α is the body’s natural antiviral agent, but its Janus kinase/signal transducer and activators of transcription (JAK/STAT) signalling pathway is often antagonized by viruses, thereby preventing the upregulation of essential IFN stimulated genes (ISGs). Therapeutic IFN-α has disappointingly weak clinical responses in MERS-CoV and SARS-CoV-1 infected patients, indicating that these CoVs inhibit the IFN-α JAK/STAT pathway. Here we show that in lung alveolar A549 epithelial cells expression of MERS-CoV-nsp2 and SARS-CoV-1-nsp14, but not MERS-CoV-nsp5, increased basal levels of total and phosphorylated STAT1 & STAT2 protein, but reduced IFN-α-mediated phosphorylation of STAT1-3 and induction of MxA. While MERS-CoV-nsp2 and SARS-CoV-1-nsp14 similarly increased basal levels of STAT1 and STAT2 in bronchial BEAS-2B epithelial cells, unlike in A549 cells, they did not enhance basal pSTAT1 nor pSTAT2. However, both viral proteins reduced IFN-α-mediated induction of pSTAT1-3 and ISGs (MxA, ISG15 and PKR) in BEAS-2B cells. Furthermore, even though IFN-α-mediated induction of pSTAT1-3 was not affected by MERS-CoV-nsp5 expression in BEAS-2B cells, downstream ISG induction was reduced, revealing that MERS-CoV-nsp5 may use an alternative mechanism to reduce antiviral ISG induction in this cell line. Indeed, we subsequently discovered that all three viral proteins inhibited STAT1 nuclear translocation in BEAS-2B cells, unveiling another layer of inhibition by which these viral proteins suppress responses to Type 1 IFNs. While these observations highlight cell line-specific differences in the immune evasion effects of MERS-CoV and SARS-CoV-1 proteins, they also demonstrate the broad spectrum of immune evasion strategies these deadly coronaviruses use to stunt antiviral responses to Type IFN. View Full-Text
Keywords: MERS-CoV; SARS-CoV-1; SARS-CoV-2; interferon-alpha; JAK/STAT (janus kinase/signal transducer and activator of transcription); ISG (interferon stimulated genes); immune evasion MERS-CoV; SARS-CoV-1; SARS-CoV-2; interferon-alpha; JAK/STAT (janus kinase/signal transducer and activator of transcription); ISG (interferon stimulated genes); immune evasion
►▼ Show Figures 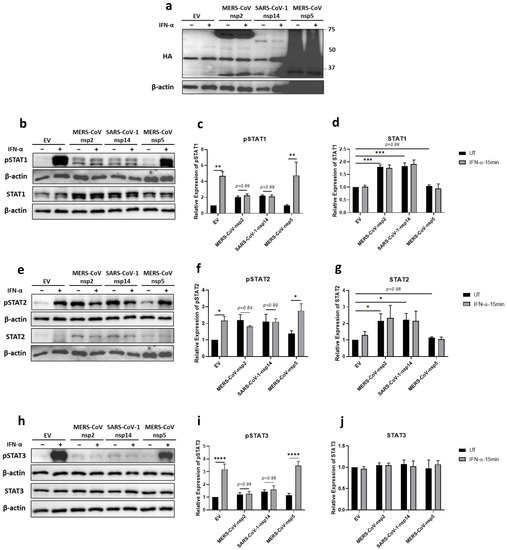