Influenza A virus (IAV) is the most common infectious agent in humans, and infects approximately 10–20% of the world’s population, resulting in 3–5 million hospitalizations per year. A scientific literature search was performed using the PubMed database and the Medical Subject Headings (MeSH) “Influenza A H1N1” and “Genetic susceptibility”. Due to the amount of information and evidence about genetic susceptibility generated from the studies carried out in the last influenza A H1N1 pandemic, studies published between January 2009 to May 2020 were considered; 119 papers were found. Several pathways are involved in the host defense against IAV infection (innate immune response, pro-inflammatory cytokines, chemokines, complement activation, and HLA molecules participating in viral antigen presentation). On the other hand, single nucleotide polymorphisms (SNPs) are a type of variation involving the change of a single base pair that can mean that encoded proteins do not carry out their functions properly, allowing higher viral replication and abnormal host response to infection, such as a cytokine storm. Some of the most studied SNPs associated with IAV infection genetic susceptibility are located in the FCGR2A, C1QBP, CD55, and RPAIN genes, affecting host immune responses through abnormal complement activation. Also, SNPs in IFITM3 (which participates in endosomes and lysosomes fusion) represent some of the most critical polymorphisms associated with IAV infection, suggesting an ineffective virus clearance. Regarding inflammatory response genes, single nucleotide variants in IL1B, TNF, LTA IL17A, IL8, IL6, IRAK2, PIK3CG, and HLA complex are associated with altered phenotype in pro-inflammatory molecules, participating in IAV infection and the severest form of the disease. View Full-Text
Keywords: influenza; inflammation; genetic susceptibility; polymorphisms; cytokine storm influenza; inflammation; genetic susceptibility; polymorphisms; cytokine storm
►▼ Show Figures 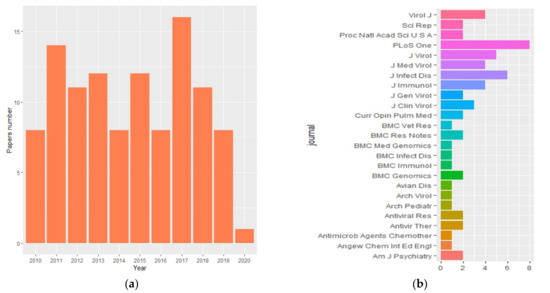