SDAV, the Rat Coronavirus—How Much Do We Know about It in the Light of Potential Zoonoses

Sialodacryoadenitis virus (SDAV) is known to be an etiological agent, causing infections in laboratory rats. Until now, its role has only been considered in studies on respiratory and salivary gland infections. The scant literature data, consisting mainly of papers from the last century, do not sufficiently address the topic of SDAV infections. The ongoing pandemic has demonstrated, once again, the role of the Coronaviridae family as extremely dangerous etiological agents of human zoonoses. The ability of coronaviruses to cross the species barrier and change to hosts commonly found in close proximity to humans highlights the need to characterize SDAV infections. The main host of the infection is the rat, as mentioned above. Rats inhabit large urban agglomerations, carrying a vast epidemic threat. Of the 2277 existing rodent species, 217 are reservoirs for 66 zoonotic diseases caused by viruses, bacteria, fungi, and protozoa. This review provides insight into the current state of knowledge of SDAV characteristics and its likely zoonotic potential. View Full-Text
Keywords: SDAV; rat infections; coronaviruses; zoonoses SDAV; rat infections; coronaviruses; zoonoses
►▼ Show Figures 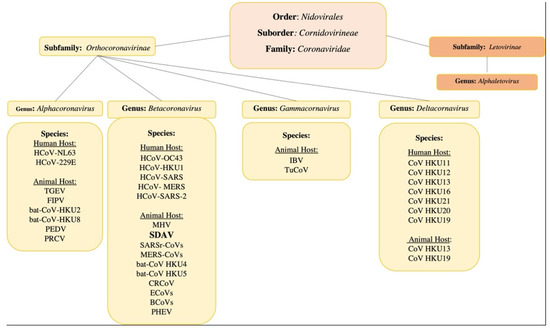