Human adenovirus infection is driven by Early region 1A (E1A) proteins, which are the first proteins expressed following the delivery of the viral genome to the cellular nucleus. E1A is responsible for reprogramming the infected cell to support virus replication alongside the activation of expression of all viral transcriptional units during the course of the infection. Although E1A has been extensively studied, most of these studies have focused on understanding the conserved region functions outside of a full infection. Here, we investigated the effects of small deletions in E1A exon 1 on the viral replicative cycle. Almost all deletions were found to have a negative impact on viral replication with the exception of one deletion found in the mutant dl1106, which replicated better than the wild-type E1A expressing dl309. In addition to growth, we assessed the virus mutants for genome replication, induction of the cytopathic effect, gene and protein expression, sub-cellular localization of E1A mutant proteins, induction of cellular S-phase, and activation of S-phase specific cellular genes. Importantly, our study found that virus replication is likely limited by host-specific factors, rather than specific viral aspects such as the ability to replicate genomes or express late proteins, after a certain level of these has been expressed. Furthermore, we show that mutants outside of the conserved regions have significant influence on viral fitness. Overall, our study is the first comprehensive evaluation of the dl1100 series of exon 1 E1A deletion mutants in viral fitness and provides important insights into the contribution that E1A makes to viral replication in normal human cells.
Keywords: adenovirus; E1A; exon 1; replication adenovirus; E1A; exon 1; replication
►▼ Show Figures 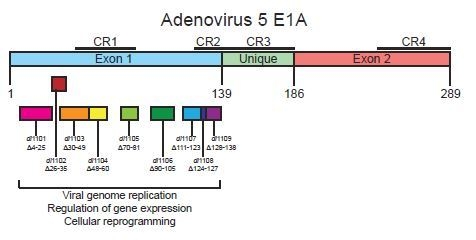