A Decade in Review: A Systematic Review of Universal Influenza Vaccines in Clinical Trials during the 2010 Decade
Previous Article in Journal

Broadly neutralizing monoclonal antibodies (bNAbs) against conserved domains in the influenza hemagglutinin are in clinical trials. Several next generation influenza vaccines designed to elicit such bNAbs are also in clinical development. One of the common features of the isolated bNAbs is the use of restricted IgVH repertoire. More than 80% of stem-targeting bNAbs express IgVH1-69, which may indicate genetic constraints on the evolution of such antibodies. In the current study, we evaluated a panel of influenza virus bNAbs in comparison with HIV-1 MAb 4E10 and anti-RSV MAb Palivizumab (approved for human use) for autoreactivity using 30 normal human tissues microarray and human protein (>9000) arrays. We found that several human bNAbs (CR6261, CR9114, and F2603) reacted with human tissues, especially with pituitary gland tissue. Importantly, protein array analysis identified high-affinity interaction of CR6261 with the autoantigen “Enhancer of mRNA decapping 3 homolog” (EDC3), which was not previously described. Moreover, EDC3 competed with hemagglutinin for binding to bNAb CR6261. These autoreactivity findings underscores the need for careful evaluation of such bNAbs for therapeutics and stem-based vaccines against influenza virus. View Full-Text
Keywords: influenza; hemagglutinin; autoreactivity; polyreactivity; stem; head; vaccine; antibody affinity; bNAbs; universal influenza influenza; hemagglutinin; autoreactivity; polyreactivity; stem; head; vaccine; antibody affinity; bNAbs; universal influenza
►▼ Show Figures 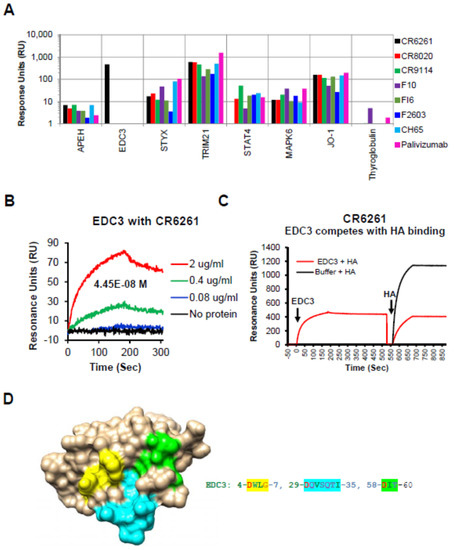