In September 2016, clinical signs, indicative of bluetongue, were observed in sheep in Cyprus. Bluetongue virus serotype 8 (BTV-8) was detected in sheep, indicating the first incursion of this serotype into Cyprus. Following virus propagation, Nextera XT DNA libraries were sequenced on the MiSeq instrument. Full-genome sequences were obtained for five isolates CYP2016/01-05 and the percent of nucleotide sequence (% nt) identity between them ranged from 99.92% to 99.95%, which corresponded to a few (2–5) amino acid changes. Based on the complete coding sequence, the Israeli ISR2008/13 (98.42–98.45%) was recognised as the closest relative to CYP2016/01-05. However, the phylogenetic reconstruction of CYP2016/01-05 revealed that the possibility of reassortment in several segments: 4, 7, 9 and 10. Based on the available sequencing data, the incursion BTV-8 into Cyprus most likely occurred from the neighbouring countries (e.g., Israel, Lebanon, Syria, or Jordan), where multiple BTV serotypes were co-circulating rather than from Europe (e.g., France) where a single BTV-8 serotype was dominant. Supporting this hypothesis, atmospheric dispersion modelling identified wind-transport events during July–September that could have allowed the introduction of BTV-8 infected midges from Lebanon, Syria or Israel coastlines into the Larnaca region of Cyprus. View Full-Text
Keywords: bluetongue virus; BTV-8; reassortment; NGS; midge; NAME bluetongue virus; BTV-8; reassortment; NGS; midge; NAME
►▼ Show Figures 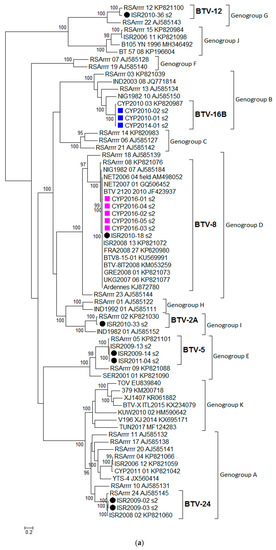