Functional RNA Structures in the 3′UTR of Tick-Borne, Insect-Specific and No-Known-Vector Flaviviruses

Untranslated regions (UTRs) of flaviviruses contain a large number of RNA structural elements involved in mediating the viral life cycle, including cyclisation, replication, and encapsidation. Here we report on a comparative genomics approach to characterize evolutionarily conserved RNAs in the 3UTR of tick-borne, insect-specific and no-known-vector flaviviruses in silico. Our data support the wide distribution of previously experimentally characterized exoribonuclease resistant RNAs (xrRNAs) within tick-borne and no-known-vector flaviviruses and provide evidence for the existence of a cascade of duplicated RNA structures within insect-specific flaviviruses. On a broader scale, our findings indicate that viral 3UTRs represent a flexible scaffold for evolution to come up with novel xrRNAs. View Full-Text
Keywords: flavivirus; non-coding RNA; secondary structure flavivirus; non-coding RNA; secondary structure
►▼ Show Figures 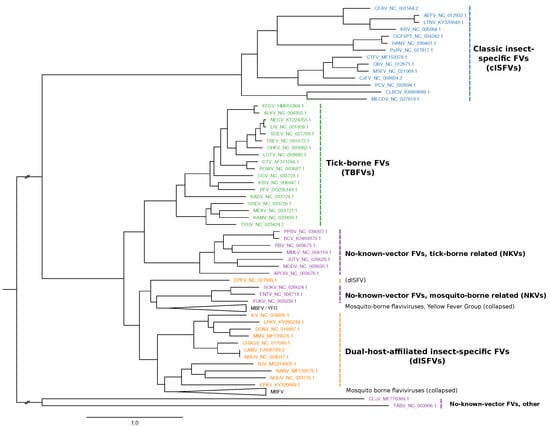