The Interplay of Viral and Host Factors in Chikungunya Virus Infection: Targets for Antiviral Strategies
Next Article in Special Issue

The first cases of AIDS in Spain were reported in 1982. Since then over 85,000 persons with AIDS have been cumulated, with 60,000 deaths. Current estimates for people living with HIV are of 145,000, of whom 20% are unaware of it. This explains the still high rate of late HIV presenters. Although the HIV epidemic in Spain was originally driven mostly by injection drug users, since the year 2000 men having sex with men (MSM) account for most new incident HIV cases. Currently, MSM represent over 80% of new yearly HIV diagnoses. In the 80s, a subset of young doctors and nurses working at Internal Medicine hospital wards became deeply engaged in attending HIV-infected persons. Before the introduction of antiretrovirals in the earlier 1990s, diagnosis and treatment of opportunistic infections was their major task. A new wave of infectious diseases specialists was born. Following the wide introduction of triple combination therapy in the late 1990s, drug side effects and antiretroviral resistance led to built a core of highly devoted HIV specialists across the country. Since then, HIV medicine has improved and currently is largely conducted by multidisciplinary teams of health care providers working at hospital-based outclinics, where HIV-positive persons are generally seen every six months. Antiretroviral therapy is currently prescribed to roughly 75,000 persons, almost all attended at clinics belonging to the government health public system. Overall, the impact of HIV/AIDS publications by Spanish teams is the third most important in Europe. HIV research in Spain has classically been funded mostly by national and European public agencies along with pharma companies. Chronologically, some of the major contributions of Spanish HIV research are being in the field of tuberculosis, toxoplasmosis, leishmaniasis, HIV variants including HIV-2, drug resistance, pharmacology, antiretroviral drug-related toxicities, coinfection with viral hepatitis, design and participation in clinical trials with antiretrovirals, immunopathogenesis, ageing, and vaccine development. View Full-Text
Keywords: HIV research; HIV prevention; HIV education; antiretroviral therapy; Spain; hepatitis; AIDS history HIV research; HIV prevention; HIV education; antiretroviral therapy; Spain; hepatitis; AIDS history
►▼ Show Figures 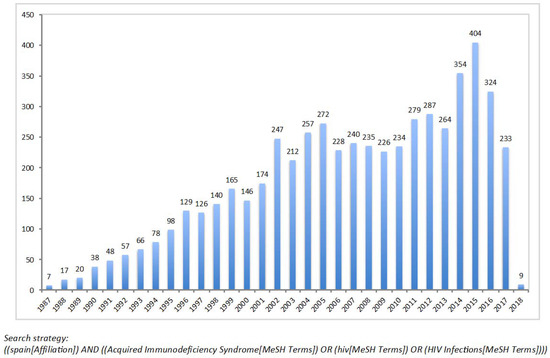