Wood density is one of the most important and well documented wood quality attributes. However, studies focusing on the effects of thinning combined with pruning on wood density in Mediterranean areas are scarce, even though both are recommended practices in forests managed for the production of high-quality timber. We assess the effects of both silvicultural interventions on wood density traits (tree-ring, earlywood, and latewood) and on the percentage of latewood, on an annual scale, for the main timber species Pinus sylvestris L. and Pinus nigra Arnold (subsp. nigra and subsp. salzmannii) in Mediterranean mountains. To this end, three trials (one species per trial) were established in monospecific reforestations in the 1990s. Three silvicultural treatments were applied: thinning, thinning combined with pruning, and a control. At the time of installation, stand ages ranged from 26 to 37 years. Small differences were found among treatments in regard to the wood density attributes, with no significant effects of thinning and pruning on the studied wood traits in either timber species. The two subspecies of P. nigra presented comparatively denser wood than P. sylvestris. Our results suggest that thinning and pruning treatments can be applied without causing unfavourable changes to wood density. View Full-Text
Keywords: scots pine; black pine; Itrax; microdensitometry; tree-rings; wood quality scots pine; black pine; Itrax; microdensitometry; tree-rings; wood quality
►▼ Show Figures 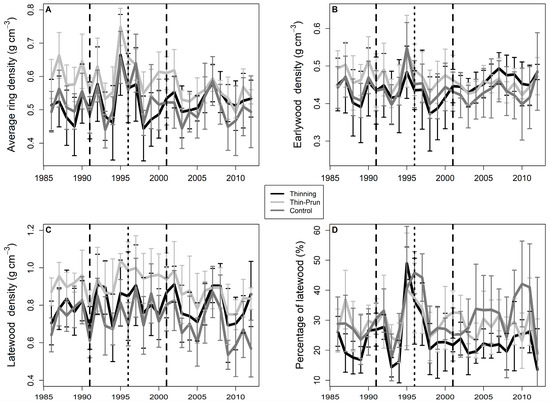