We developed two tree-ring chronologies of teak (Tectona grandis L.f.) from Mae Tuen (462-year, 1555–2016) and Umphang (165-year, 1852–2016) in Tak province, northwestern Thailand. The chronologies were based on 67 and 71 living teak trees, respectively. We used crossdating methods to check and verify the tree-ring width data and tree-ring chronology construction using the ARSTAN program. In this study, the two teak tree-ring chronologies from two different growth areas could not be crossdated. The relationship among these chronologies is, thus, relatively low (r = 0.33, n = 165, p < 0.01). This result shows that the growth of tree-ring structure from two sites can be affected by a variety of non-climatic patterns due to site variation, such as topography, nutrient, light, and internal factors. However, these chronologies have a significant positive correlation with rainfall, during the pre-monsoon season (April to May). As demonstrated by the spatial correlation patterns, these chronologies represent April to May rainfall, which was a limiting factor of teak growth from northwestern Thailand. While the difference in surface temperatures of the Indian Ocean Dipole (IOD) might not be affected by rainfall, its unstable relationship with the El Niño-Southern Oscillation (ENSO) was noted to have occurred. View Full-Text
Keywords: dendroclimatology; ring-width; teak (Tectona grandis L.f.) dendroclimatology; ring-width; teak (Tectona grandis L.f.)
►▼ Show Figures 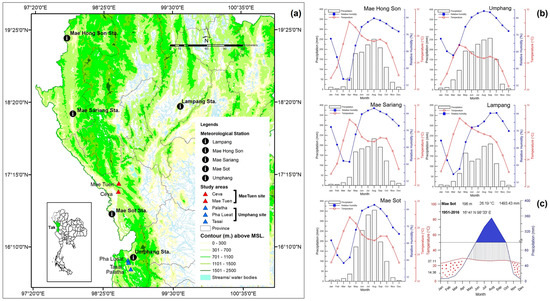