Natural and Anthropogenic Transformations of A Baltic Raised Bog (Bagno Kusowo, North West Poland) in the Light of Dendrochronological Analysis of Pinus sylvestris L.
Next Article in Special Issue

We compared the changes in aboveground biomass and initial recovery of C pools and CO2 efflux following fire disturbances in Scots pine (Pinus sylvesteris L.) stands with different time since stand-replacing fire. The study areas are located in hemiboreal vegetation zone, in north-western Estonia, in Vihterpalu. Six areas where the last fire occurred in the year 1837, 1940, 1951, 1982, 1997, and 2008 were chosen for the study. Our results show that forest fire has a substantial effect on the C content in the top soil layer, but not in the mineral soil layers. Soil respiration showed a chronological response to the time since the forest fire and the values were lowest in the area where the fire was in the year 2008. The respiration values also followed seasonal pattern being highest in August and lowest in May and November. The CO2 effluxes were lowest on the newly burned area through the entire growing season. There was also a positive correlation between soil temperature and soil respiration values in our study areas. View Full-Text
Keywords: fire disturbance; Pinus sylvestris; recovery; soil respiration fire disturbance; Pinus sylvestris; recovery; soil respiration
►▼ Show Figures 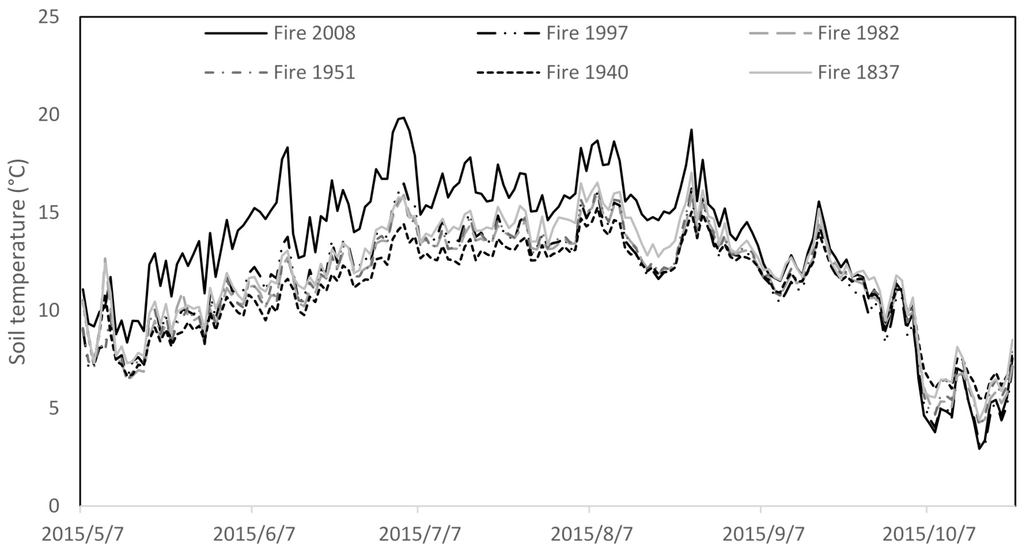