Comparative Study of Local and National Media Reporting: Conflict around the TV Oak in Stockholm, Sweden

The TV oak (Television Oak) conflict concerned felling an old tree in a wealthy area of Stockholm. The case received great public attention in different media formats with different scopes (e.g., newspapers, television, internet). The TV Oak issue involved actors with different, partly conflicting perceptions. Assuming that the relevance of urban tree management issues in particular leads to increased interest among the local audience, this paper compared differences in reporting on the TV Oak case in local and national newspapers. The comparison comprised the actors “speaking” in the newspapers, the interest roles attributed to different actors and the frames used. The empirical materials used were articles concerning the TV Oak published between October 2011 and June 2012 in one local and two national Swedish newspapers. Quantitative analysis of statements in these articles showed that the geographical scope of the newspaper was not the major driving force framing the TV Oak conflict and that variety of framings, ranging from a humanised perception of the oak to a more analytical hazard perception, were used. Differences between the interest roles allocated to different actors (e.g., in terms of victim, causer, and helper in the oak conflict) showed that the framing of conflicts very much depended on single actors, in particular a high profile journalist in the national newspapers and private individuals writing letters to the editor in the local newspaper. View Full-Text
Keywords: media analysis; mediated conflicts; framing; newspaper; urban tree cut media analysis; mediated conflicts; framing; newspaper; urban tree cut
►▼ Show Figures 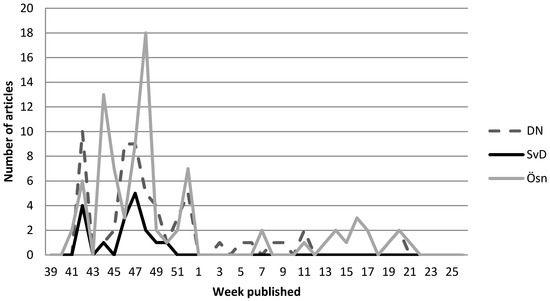