Assessing the Connectivity of Riparian Forests across a Gradient of Human Disturbance: The Potential of Copernicus “Riparian Zones” in Two Hydroregions
Previous Article in Special Issue

Avian Response to Wildfire Severity in a Northern Boreal Region

Natural disturbances are an integral part of forested ecosystem function and successional pathways. In many forested ecosystems, wildfires are critical to shaping composition and structure, which, in turn, has major implications for wildlife usage and behavior. In July 2018, a wildfire burned 225 ha of the Altona Flat Rock pine barrens in northern New York. This event presented the opportunity to study how wildlife respond to the immediate effects of disturbance in this unique habitat but also how that response would change through time as regeneration progressed. Game cameras were deployed from September 2018 to September 2020 at two reference (unburned) and two disturbed (burned) sites within the pine barrens. We analyzed total and seasonal occurrences, to determine how usage differed between disturbed and reference conditions, and with time since disturbance. Additionally, for coyote (Canis latrans, Say), white-tailed deer (Odocoileus virginianus, Zimmermann), and snowshoe hare (Lepus americanus, Erxleben), we evaluated daily activity patterns and overlap to determine how predator–prey relationships differed between conditions, and with time since disturbance. Over 730 days, a total of 1048 wildlife occurrences were captured across 23 wildlife species. Fifty-seven percent of all occurrences were at reference sites with over 100 more occurrences than at disturbed sites; however, differences were most pronounced immediately following the fire and overall occurrences have grown more similar between the sites over time. Specifically, deer and hare were found more often at reference sites immediately following the fire, but shifted to using both conditions equally by the first growing season. Habitat overlap among sympatric prey (deer, hare) can be explained by understory regeneration increasing foraging opportunities and concealment cover in the disturbed condition, while predators (coyotes) tracked prey availability regardless of the habitat condition. This study provides wildlife management guidance on habitat use and response to disturbance for these unique sandstone pavement barrens. View Full-Text
Keywords: disturbance; ecosystem recovery; succession; regeneration; game cameras; predator–prey; diel activity; jack pine disturbance; ecosystem recovery; succession; regeneration; game cameras; predator–prey; diel activity; jack pine
►▼ Show Figures 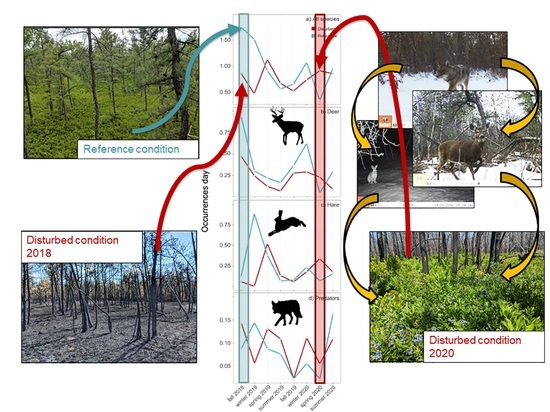