Non-native earthworms can cause abrupt changes in forest ecosystems by altering soil properties and depleting or redistributing soil carbon (C) stocks. The forests of Northern Maine are often perceived as having winters that are too harsh to support earthworm populations and that earthworms are restricted to more southerly regions. In this study, we report the discovery of European earthworms at two research sites in Northern Maine. At one site, earthworms were only found across a portion of the forest, and the median organic (O) horizon C stock in the area with earthworms was 34% less than that of areas without earthworms. At a second site, earthworms were found across the entire 60-ha forest and the median O horizon C stock was 39% less than that of a similar forest without earthworms. Consistent with reports from other regions, areas with earthworms had no or minimal eluvial (E) horizons, while earthworm-free locations always had E horizons. Earthworm presence was always associated with a topsoil (A) horizon, reflecting mechanical mixing and organic matter processing by earthworms. This is one of the first reports of non-native earthworm presence in Northern Maine forests and monitoring changes in soil C will be important for determining rates of C sequestration in these forests. Warmer winter temperatures, particularly winter minimums, and greater annual precipitation will likely increase the success of new earthworm introductions across Northern Maine forests. Management actions that limit the transport of earthworms into earthworm-free areas should be carefully evaluated to minimize the potential for new introductions. View Full-Text
Keywords: biological invasions; climate change; disturbance regimes; forest soil; Maine adaptive silviculture network biological invasions; climate change; disturbance regimes; forest soil; Maine adaptive silviculture network
►▼ Show Figures 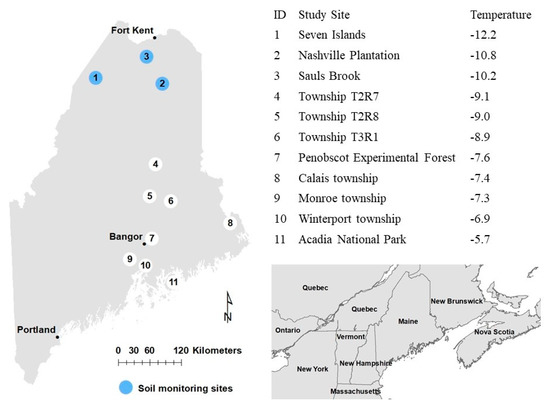 Joshua J. Puhlick
Joshua Puhlick holds degrees in forestry from University of Maine (BS, PhD) and Northern Arizona University (MS). He is currently a Research Associate in the School of Forest Resources at the University of Maine. His research has focused on silvicultural strategies for meeting ecosystem services including carbon storage.

Ivan J. Fernandez
Ivan Fernandez received his BS in Biology (Hartwick College), MS in Soil Chemistry and PhD in Forest Resources (University of Maine). After working for the National Council for Air and Stream Improvement (NCASI) he returned to the University of Maine as Professor of Soil Science where he has studied biogeochemical cycling in northern forests for over three decades.

Jay W. Wason
Jay Wason has degrees from the University of Pittsburgh (BA) and the State University of New York College of Environmental Science and Forestry (PhD). He is currently an Assistant Professor of Forest Ecosystem Physiology in the School of Forest Resources at the University of Maine. His research focuses on tree ecophysiology, climate change, and forest ecology.
Zoom | Orient | As Lines | As Sticks | As Cartoon | As Surface | Previous Scene | Next Scene
We use cookies on our website to ensure you get the best experience. Read more about our cookies here.
Accept
We have just recently launched a new version of our website. Help us to further improve by taking part in this short 5 minute survey here. here.
Never show this again