This study aims to estimate the total biomass aboveground and soil carbon stocks in a Mediterranean riparian forest and identify the contribution of the different species and ecosystem compartments to the overall riparian carbon reservoir. We used a combined field and object-based image analysis (OBIA) approach, based on unmanned aerial vehicle (UAV) multispectral imagery, to assess C stock of three dominant riparian species. A linear discriminator was designed, based on a set of spectral variables previously selected in an optimal way, permitting the classification of the species corresponding to every object in the study area. This made it possible to estimate the area occupied by each species and its contribution to the tree aboveground biomass (AGB). Three uncertainty levels were considered, related to the trade-off between the number of unclassified and misclassified objects, leading to an error control associated with the estimated tree AGB. We found that riparian woodlands dominated by Acacia dealbata Link showed the highest average carbon stock per unit area (251 ± 90 tC ha−1) followed by Alnus glutinosa (L.) Gaertner (162 ± 12 tC ha−1) and by Salix salviifolia Brot. (73 ± 17 tC ha−1), which are mainly related to the stem density, vegetation development and successional stage of the different stands. The woody tree compartment showed the highest inputs (79%), followed by the understory vegetation (12%) and lastly by the soil mineral layer (9%). Spectral vegetation indices developed to suppress saturation effects were consistently selected as important variables for species classification. The total tree AGB in the study area varies from 734 to 1053 tC according to the distinct levels of uncertainty. This study provided the foundations for the assessment of the riparian carbon sequestration and the economic value of the carbon stocks provided by similar Mediterranean riparian forests, a highly relevant ecosystem service for the regulation of climate change effects. View Full-Text
Keywords: above ground biomass (AGB); carbon stocks; ecosystem services; riparian allometric equations; unmanned aerial vehicle (UAV) above ground biomass (AGB); carbon stocks; ecosystem services; riparian allometric equations; unmanned aerial vehicle (UAV)
►▼ Show Figures 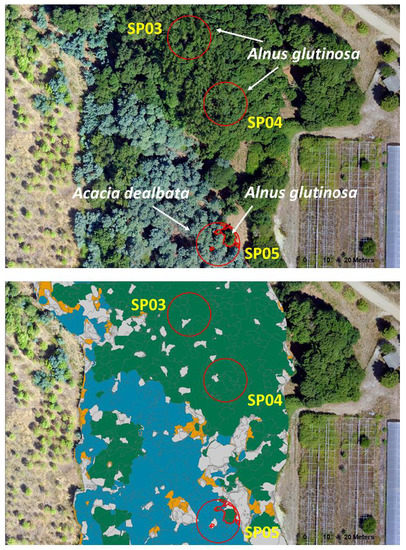