A Survey in Natural Forest Ecosystems of Vietnam Reveals High Diversity of both New and Described Phytophthora Taxa including P. ramorum

Phytophthora root rot is considered one of the main factors associated with holm oak (Quercus ilex L.) mortality. The effectiveness and accuracy of soilborne pathogen and management could be influenced by soil spatial heterogeneity. This factor is of special relevance in many afforestation of southwestern Spain, which were carried out without phytosanitary control of the nursery seedlings. We selected a study area located in a 15 year-old afforestation of Q. ilex, known to be infested by Phytophthora cinnamomi Rands. Soil samples (ntotal = 132) were taken systematically from a grid under 4 trees, and analysed to quantify 12 variables, the colony forming units (cfu) of P. cinnamomi plus 11 physical and chemical soil properties. The combined analysis of all variables was performed with linear mixed models (GLMM), and the spatial patterns of cfu were characterised using an aggregation index (Ia) and a clustering index (ν) by SADIE. Cfu values ranged from 0 to 211 cfu g−1, and the GLMM built with the variables silt, P, K and soil moisture explained the cfu distribution to the greatest extent. The spatial analysis showed that 9 of the 12 variables presented spatial aggregation (Ia > 1), and the clustering of local patches (νi ≥ 1.5) for organic matter, silt, and Ca. The spatial patterns of the P. cinnamomi cfu under planted holm oak trees are related to edaphic variables and canopy cover. Small-scale spatial analysis of microsite variability can predict which areas surrounding trees can influence lower oomycetes cfu availability. View Full-Text
Keywords: GLMM; holm oak decline; tree mortality; root rot.; plantation; dehesas; montados; open forests GLMM; holm oak decline; tree mortality; root rot.; plantation; dehesas; montados; open forests
►▼ Show Figures 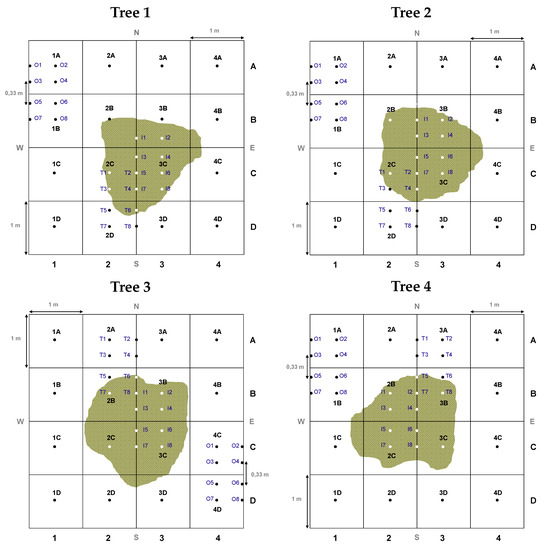