The Effects of Crop Tree Management on the Fine Root Traits of Pinus massoniana in Sichuan Province, China
Previous Article in Journal

The objective of this research was to study the differences in endogenous hormone levels and the genes related to reproductive development in Chinese pinenut (Pinus koraiensis) trees of different ages. The apical buds of P. koraiensis were collected from 2-, 5-, 10-, 15-, and 30-year-old plants and also from grafted plants. There were three replicates from each group used for transcriptome sequencing. After assembly and annotation, we identified the differentially expressed genes (DEGs) and performed enrichment analysis, pathway analysis, and expression analysis of the DEGs in each sample. The results showed that unigenes related to reproductive development, such as c64070.graph_c0 and c68641.graph_c0, were expressed at relatively low levels at young ages, and that the relative expression gradually increased with increasing plant age. In addition the highest expression levels were reached around 10 and 15 years of age, after which they gradually decreased. Moreover, some unigenes, such as c61855.graph_c0, were annotated as abscisic acid hydroxylase genes, and the expression of c61855.graph_c0 gradually declined with increasing age in P. koraiensis. View Full-Text
Keywords: Floral primordia; floral meristem; inflorescence development; ABC model; gene regulation; Pinus koraiensis Floral primordia; floral meristem; inflorescence development; ABC model; gene regulation; Pinus koraiensis
►▼ Show Figures 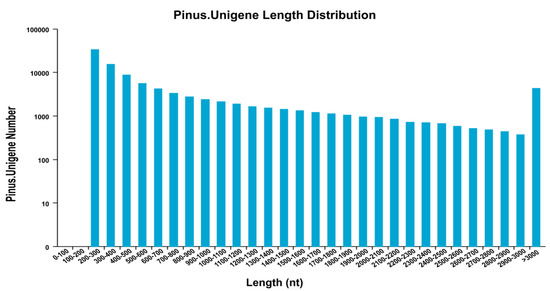