Patterns of Density and Production in the Community Forests of the Sierra Madre Occidental, Mexico
Next Article in Special Issue

PHYCI_587572: An RxLR Effector Gene and New Biomarker in A Recombinase Polymerase Amplification Assay for Rapid Detection of Phytophthora cinnamomi

Phytophthora cinnamomi is a devastating pathogen causing root and crown rot and dieback diseases of nearly 5000 plant species. Accurate and rapid detection of P. cinnamomi plays a fundamental role within the current disease prevention and management programs. In this study, a novel effector gene PHYCI_587572 was found as unique to P. cinnamomi based on a comparative genomic analysis of 12 Phytophthora species. Its avirulence homolog protein 87 (Avh87) is characterized by the Arg-Xaa-Leu-Arg (RxLR) motif. Avh87 suppressed the pro-apoptotic protein BAX- and elicitin protein INF1-mediated cell death of Nicotiana benthamiana. Furthermore, a recombinase polymerase amplification-lateral flow dipstick detection assay targeting this P. cinnamomi-specific biomarker was developed. While successfully detected 19 P. cinnamomi isolates of a global distribution, this assay lacked detection of 37 other oomycete and fungal species, including P. parvispora, a sister taxon of P. cinnamomi. In addition, it detected P. cinnamomi from artificially inoculated leaves of Cedrus deodara. Moreover, the RPA-LFD assay was found to be more sensitive than a conventional PCR assay, by detecting as low as 2 pg of genomic DNA in a 50-µL reaction. It detected P. cinnamomi in 13 infested soil samples, while the detection rate was 46.2% using PCR. Results in this study indicated that PHYCI_587572 is a unique biomarker for detecting P. cinnamomi. Although PHYCI_587572 was identified as an effector gene based on the RxLR motif of Avh87 and the avirulence activity on Nicotiana, its exact genetic background and biological function on the natural hosts of P. cinnamomi warrant further investigations. View Full-Text
Keywords: plant destroyers; disease diagnosis; RxLR-dEER; soil-borne pathogen; exclusivity; inclusivity plant destroyers; disease diagnosis; RxLR-dEER; soil-borne pathogen; exclusivity; inclusivity
►▼ Show Figures 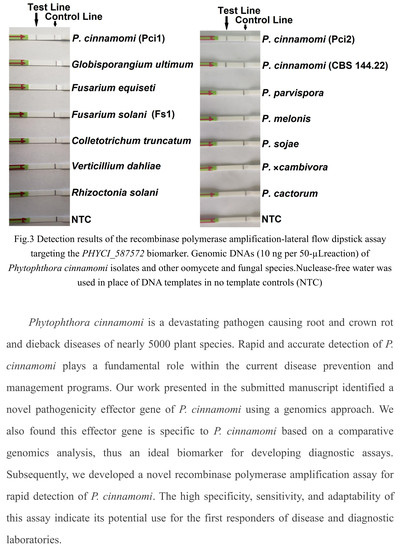