The Effect of Harvesting on National Forest Carbon Sinks up to 2050 Simulated by the CBM-CFS3 Model: A Case Study from Slovenia
Previous Article in Journal

Wind and Snow Loading of Balsam Fir during a Canadian Winter: A Pioneer Study

Widely distributed across Quebec, balsam fir (Abies balsamea (L.) Mill) is highly vulnerable to wind damage. The harsh winter conditions, freezing temperatures, and snow pose an additional risk. It is important to find the mechanical loads experienced by trees during winter to adapt forest management and minimize the risk of damage to this species. Many studies have been carried out on wind and snow loading damage risks in Northern Europe, mostly based on post-storm damage inventories. However, no study has continuously monitored the applied turning moment during a period with snow loading, and no study has investigated wind and snow loading on balsam fir. Therefore, our main objective was to conduct a pioneering study to see how trees bend under wind loading during winter, and to see how snow cover on the canopy contributes to the loading. Two anemometers placed at canopy height and 2/3 canopy height, air and soil temperature sensors, a hunting camera, and strain gauges attached to the trunks of fifteen balsam fir trees, allowed us to measure the wind and snow induced bending moments experienced by the trees together with the meteorological conditions. Data were recorded at a frequency of 5 Hz for more than 2000 h during summer 2018 and winter 2019. Two mixed linear models were used to determine which tree and stand parameters influence the turning moment on the trees and evaluate the effect of winter. The selected model for measurements made during winter found that including the snow thickness on crowns was better than those models that did not consider the effect of snow (ΔAICc > 25), but the effect of snow depth on the bending moment appears to be minor. However, overall, the turning moment experienced by trees during winter was found to be higher than the turning moment experienced at the same wind speed in summer. This is probably a result of increases in the rigidity of the stem and root system during freezing temperatures and the change in wind flow through the forest due to snow on the canopy and on the ground during the winter season. View Full-Text
Keywords: windthrow; wind damage; snow monitoring; boreal forests; modeling; turning moment; wind loading; balsam fir; season windthrow; wind damage; snow monitoring; boreal forests; modeling; turning moment; wind loading; balsam fir; season
►▼ Show Figures 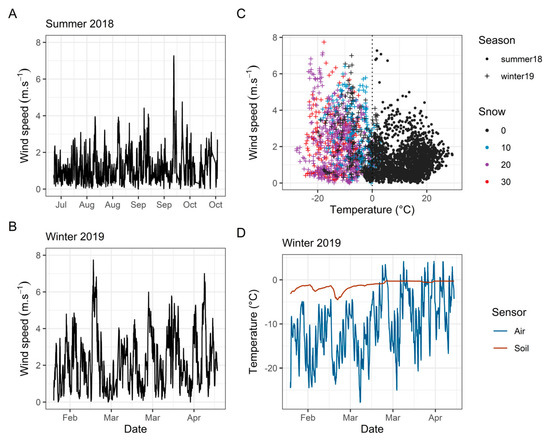