Occurrence of European Mistletoe (Viscum album L.) on Forest Trees in Poland and Its Dynamics of Spread in the Period 2008–2018

As recently reported, European mistletoe has become an important agent of damage to forest trees in Central Europe. To document the extent of its impact, host and environmental preferences, as well as spatial and temporal dynamics, we have analyzed the results of 10 years of annual assessments of tree damage in level 1 plots of country-wide national forest monitoring. Mistletoe was found on 12 forest tree species, most frequently on silver fir and Scots pine, much less often on birches and deciduous admixture species. Common beech, pedunculate, and sessile oaks, as well as coniferous admixture species, were found to be free from the parasite. Mistletoe was more common on larger trees, mainly those in the 1st and 2nd Kraft classes, characterized by a higher DBH value than trees without V. album. Infestation was also age-dependent with low numbers of infested trees in young age classes and a much higher proportion of infested trees being over 80–100 years in age. Defoliation of trees colonized by mistletoe was found to be significantly higher than in trees free from the parasite, confirming the adverse effect of infestation on tree health. The increase of relative incidence of tree infestation by mistletoe in forests in Poland was high throughout the entire period 2008–2018 and significant for the most threatened host species: silver fir, Scots pine, and birches. It was also found that spread direction was from west to east and that the occurrence of V. album shows clear regionalization. The most endangered forests were located within a 200 km wide zone ranging through lowland Central Poland from the border with Germany down to the border with Ukraine and Belarus. The highest concentration occurred in the Western part of the country. Outside this zone (to the north and south) the mistletoe was much less abundant as expressed by the amount of injuries caused by the parasite or infested trees per plot. View Full-Text
Keywords: damage assessment; forest health monitoring; mistletoe spread; scots pine; silver fir; birch; Viscum album damage assessment; forest health monitoring; mistletoe spread; scots pine; silver fir; birch; Viscum album
►▼ Show Figures 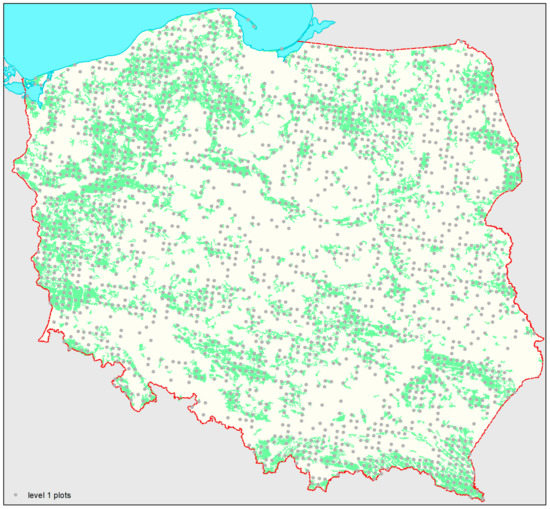