Genetic Analyses of the Laurel Wilt Pathogen, Raffaelea lauricola, in Asia Provide Clues on the Source of the Clone that is Responsible for the Current USA Epidemic

Subirrigation (SI), where water is provided to container seedlings from below and rises through the growing media via capillary action, is regarded as an environmentally-responsible method of delivering water and fertilizer to nursery-grown plants, resulting in more uniform crops and improved production efficiency. While a concern around adopting this method is that a potential higher salt concentration in the upper layers of growing media under SI may inhibit root growth and result in decreased plant quality, few studies have focused on how root morphology is altered by SI. Therefore, a balanced two-factor factorial design with three rates of fertilization (50, 100, and 150 mg N seedling−1) and two irrigation methods (SI or overhead irrigation (OI)) was used to examine the growth response of Prince Rupprecht’s larch (Larix principis-rupprechtii Mayr) seedlings for one nursery season. Associated changes between rhizosphere electrical conductivity (EC) and root morphology of different root size classes were analyzed. Results show that (1) height, root-collar diameter, and root volume were similar between seedlings grown under SI and OI. However, (2) compared to seedlings receiving OI, SI-seedlings had less root mass, length, and surface area but greater average root diameter (ARD). (3) Morphological differences were evident primarily in root diameter size classes I–III (D ≤ 1.0 mm). (4) Fertilizer rate influenced root length and surface area up to 130 days after sowing but affected ARD throughout the growing season such that seedlings treated with 50 mg N had smaller ARD than seedlings treated with 100 mg N. (5) As the growing season progressed, SI-media had significantly higher EC compared to OI-media and EC increased with increasing fertilizer rate under SI but not under OI. These results indicate that SI can produce larch seedlings of similar height and root collar diameter (RCD) compared to OI, but root systems are smaller overall with fewer small-diameter roots, which may be related to high EC levels in SI-media, which is exacerbated by the use of high rates of fertilizer. Therefore, the EC in the media should be monitored and adjusted by reducing fertilizer rates under SI. View Full-Text
Keywords: water use efficiency; seedling quality; runoff conservation; forest nursery production water use efficiency; seedling quality; runoff conservation; forest nursery production
►▼ Show Figures 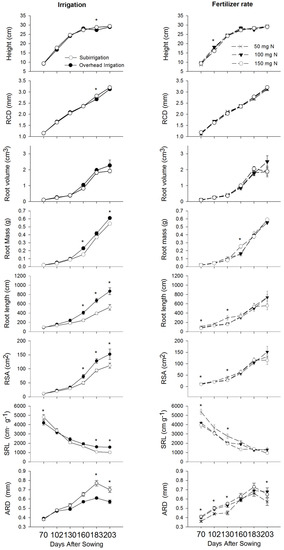