Pre-Saturation Technique of the Recycled Aggregates: Solution to the Water Absorption Drawback in the Recycled Concrete Manufacture
Previous Article in Journal

A synthesis of acrylonitrile (AN)/butyl acrylate (BA)/fumaronitrile (FN) and AN/EHA (ethyl hexyl acrylate)/FN terpolymers was carried out by redox polymerization using sodium bisulfite (SBS) and potassium persulphate (KPS) as initiator at 40 °C. The effect of comonomers, BA and EHA and termonomer, FN on the glass transition temperature (Tg) and stabilization temperature was studied using Differential Scanning Calorimetry (DSC). The degradation behavior and char yield were obtained by Thermogravimetric Analysis. The conversions of AN, comonomers (BA and EHA) and FN were 55%–71%, 85%–91% and 76%–79%, respectively. It was found that with the same comonomer feed (10%), the Tg of AN/EHA copolymer was lower at 63 °C compared to AN/BA copolymer (70 °C). AN/EHA/FN terpolymer also exhibited a lower Tg at 63 °C when compared to that of the AN/BA/FN terpolymer (67 °C). By incorporating BA and EHA into a PAN system, the char yield was reduced to ~38.0% compared to that of AN (~47.7%). It was found that FN reduced the initial cyclization temperature of AN/BA/FN and AN/EHA/FN terpolymers to 228 and 221 °C, respectively, in comparison to that of AN/BA and AN/EHA copolymers (~260 °C). In addition, FN reduced the heat liberation per unit time during the stabilization process that consequently reduced the emission of volatile group during this process. As a result, the char yields of AN/BA/FN and AN/EHA/FN terpolymers are higher at ~45.1% and ~43.9%, respectively, as compared to those of AN/BA copolymer (37.1%) and AN/EHA copolymer (38.0%). View Full-Text
Keywords: redox polymerization; polyacrylonitrile; homopolymer; copolymers; thermal behavior redox polymerization; polyacrylonitrile; homopolymer; copolymers; thermal behavior
►▼ Show Figures 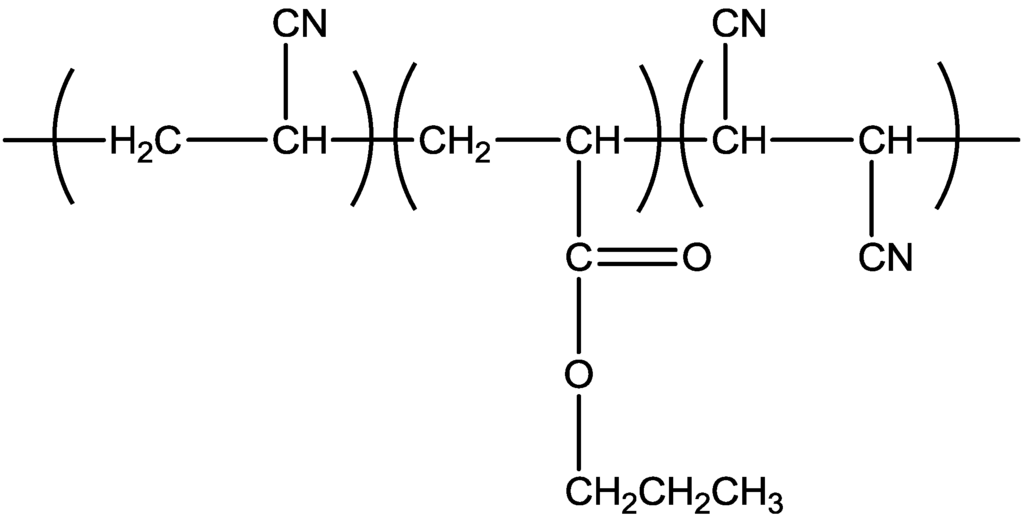