Relationship between the Surface Roughness of Material and Bone Cement: An Increased “Polished” Stem May Result in the Excessive Taper-Slip

It has been shown that bifunctional monomers (D units), which are used to increase the carbon content in silicon oxycarbide precursors, can form volatile oligomers, thus affecting the amount of carbon available during the transition into the final material in the annealing process. Additionally, an uneven distribution of carbon-rich mers may lead to the formation of a free-carbon phase, instead of the incorporation of carbon atoms into the silicon matrix. In this study, a novel two-step approach was utilized. Firstly, a macromonomer containing a number of structural units with precise structure was synthesized, which was later polycondensed into a ceramic precursor. Chlorodimethylsilane modified 2,4,6,8-tetramethylcyclotetrasiloxane was used as a silicon oxycarbide precursor monomer containing both T and D structural units (i.e., silicon atoms bonded to three and two oxygen atoms, respectively), with well-defined interconnections between structural units. Such a macromonomer prevents the formation of small siloxane rings, and has a very limited number of possible combinations of structural units neighboring each silicon atom. This, after investigation using IR, XRD, TG and elemental analysis, gave insight into the effect of “anchoring” silicon atoms bonded to two methyl groups, as well as the impact of their distribution in comparison to the materials obtained using simple monomers containing a single silicon atom (structural unit). View Full-Text
Keywords: silicon oxycarbide; black glass; macromonomer; sol-gel; preceramic polymer; IR; TG silicon oxycarbide; black glass; macromonomer; sol-gel; preceramic polymer; IR; TG
►▼ Show Figures 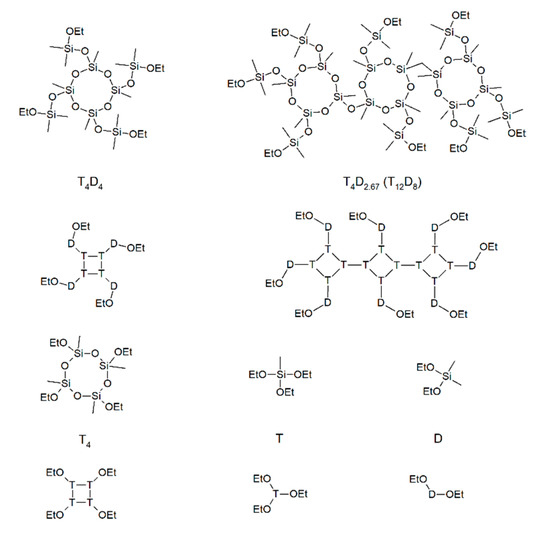