Roles of Cu in the Enhanced Thermoelectric Properties in Bi0.5Sb1.5Te3
Next Article in Special Issue

The behavior of bi- and trilayer coating systems for flexible a-Si:H based solar cells consisting of a barrier, an electrode, and an absorption layer is studied under mechanical load. First, the film morphology, stress, Young’s modulus, and crack onset strain (COS) were analyzed for single film coatings of various thickness on polyethylene terephthalate (PET) substrates. In order to demonstrate the role of the microstructure of a single film on the mechanical behavior of the whole multilayer coating, two sets of InSnOx (indium tin oxide, ITO) conductive coatings were prepared. Whereas a characteristic grain–subgrain structure was observed in ITO-1 films, grain growth was suppressed in ITO-2 films. ITO-1 bilayer coatings showed two-step failure under tensile load with cracks propagating along the ITO-1/a-Si:H-interface, whereas channeling cracks in comparable bi- and trilayers based on amorphous ITO-2 run through all constituent layers. A two-step failure is preferable from an application point of view, as it may lead to only a degradation of the performance instead of the ultimate failure of the device. Hence, the results demonstrate the importance of a fine-tuning of film microstructure not only for excellent electrical properties, but also for a high mechanical performance of flexible devices (e.g., a-Si:H based solar cells) during fabrication in a roll-to-roll process or under service. View Full-Text
Keywords: silicon-based solar cells; flexible substrates; ITO; multilayers; mechanical properties silicon-based solar cells; flexible substrates; ITO; multilayers; mechanical properties
►▼ Show Figures 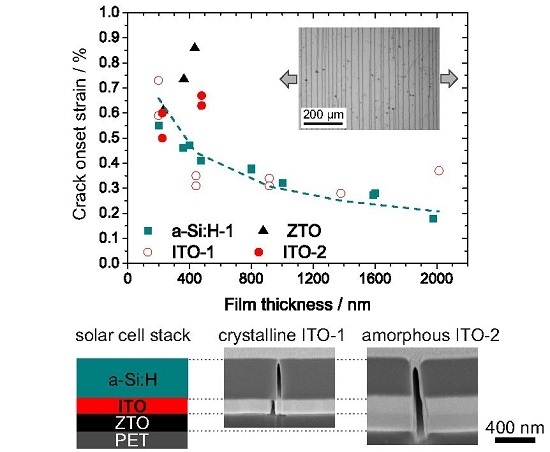