This study evaluated epigallocatechin-3-gallate (EGCG) and epigallocatechin-3-O-(3-O-methyl)-gallate (EGCG-3Me) modified etch-and-rinse adhesives (Single Bond 2, SB 2) for their antibacterial effect and bonding stability to dentin. EGCG-3Me was isolated and purified with column chromatography and preparative high performance liquid chromatography. EGCG and EGCG-3Me were incorporated separately into the adhesive SB 2 at concentrations of 200, 400, and 600 µg/mL. The effect of cured adhesives on the growth of Streptococcus mutans (S. mutans) was determined with scanning electron microscopy and confocal laser scanning microscopy; the biofilm of bacteria was further quantified via optical density 600 values. The inhibition of EGCG and EGCG-3Me on dentin-originated collagen proteases activities was evaluated with a proteases fluorometric assay kit. The degree of conversion (DC) of the adhesives was tested with micro-Raman spectrum. The immediate and post-thermocycling (5000 cycles) bond strength was assessed through Microtensile Bond Strength (MTBS) test. Cured EGCG/EGCG-3Me modified adhesives inhibit the growth of S. mutans in a concentration-dependent manner. The immediate MTBS of SB 2 was not compromised by EGCG/EGCG-3Me modification. EGCG/EGCG-3Me modified adhesive had higher MTBS than SB 2 after thermocycling, showing no correlation with concentration. The DC of the adhesive system was affected depending on the concentration of EGCG/EGCG-3Me and the depth of the hybrid layer. EGCG/EGCG-3Me modified adhesives could inhibit S. mutans adhesion to dentin–resin interface, and maintain the bonding stability. The adhesive modified with 400 µg/mL EGCG-3Me showed antibacterial effect and enhanced bonding stability without affect the DC of adhesive. View Full-Text
Keywords: antibacterial effect; dental adhesive; epigallocatechin-3-gallate; epigallocatechin-3-O-(3-O-methyl)-gallate; microtensile bond strength; thermocycling antibacterial effect; dental adhesive; epigallocatechin-3-gallate; epigallocatechin-3-O-(3-O-methyl)-gallate; microtensile bond strength; thermocycling
►▼ Show Figures 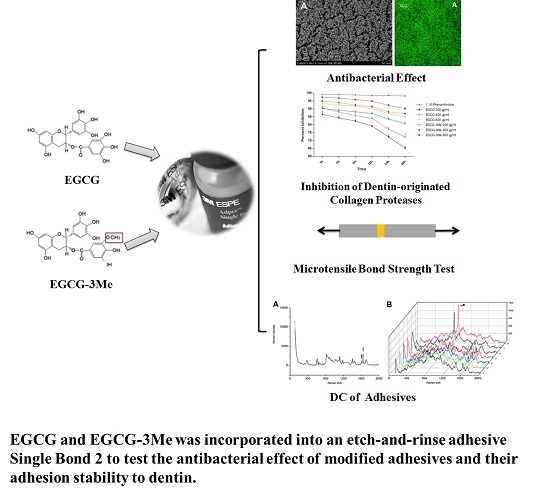