Leonardo B. Canto 1 and

In the current work, process-related thermo-mechanical changes in the rivet microstructure, joint local and global mechanical properties, and their correlation with the rivet plastic deformation regime were investigated for Ti-6Al-4V (rivet) and glass-fiber-reinforced polyester (GF-P) friction-riveted joints of a single polymeric base plate. Joints displaying similar quasi-static mechanical performance to conventional bolted joints were selected for detailed characterization. The mechanical performance was assessed on lap shear specimens, whereby the friction-riveted joints were connected with AA2198 gussets. Two levels of energy input were used, resulting in process temperatures varying from 460 ± 130 °C to 758 ± 56 °C and fast cooling rates (178 ± 15 °C/s, 59 ± 15 °C/s). A complex final microstructure was identified in the rivet. Whereas equiaxial α-grains with β-phase precipitated in their grain boundaries were identified in the rivet heat-affected zone, refined α′ martensite, Widmanstätten structures and β-fleck domains were present in the plastically deformed rivet volume. The transition from equiaxed to acicular structures resulted in an increase of up to 24% in microhardness in comparison to the base material. A study on the rivet material flow through microtexture of the α-Ti phase and β-fleck orientation revealed a strong effect of shear stress and forging which induced simple shear deformation. By combining advanced microstructural analysis techniques with local mechanical testing and temperature measurement, the nature of the complex rivet plastic deformational regime could be determined. View Full-Text
Keywords: friction riveting; microstructural formation; microtexture; titanium alloy friction riveting; microstructural formation; microtexture; titanium alloy
►▼ Show Figures 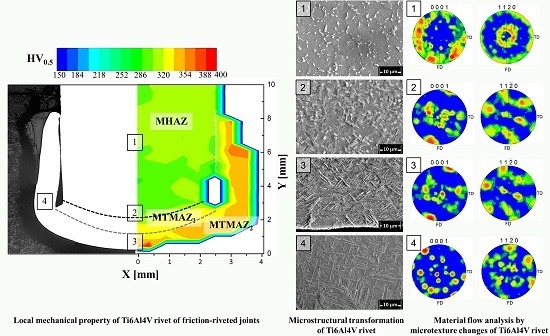