To Whom Should We Grant a Power Plant? Economic Effects of Investment in Nuclear Energy in Poland
Previous Article in Journal

How Much Human-Caused Global Warming Should We Expect with Business-As-Usual (BAU) Climate Policies? A Semi-Empirical Assessment

In order to assess the merits of national climate change mitigation policies, it is important to have a reasonable benchmark for how much human-caused global warming would occur over the coming century with “Business-As-Usual” (BAU) conditions. However, currently, policymakers are limited to making assessments by comparing the Global Climate Model (GCM) projections of future climate change under various different “scenarios”, none of which are explicitly defined as BAU. Moreover, all of these estimates are ab initio computer model projections, and policymakers do not currently have equivalent empirically derived estimates for comparison. Therefore, estimates of the total future human-caused global warming from the three main greenhouse gases of concern (CO2, CH4, and N2O) up to 2100 are here derived for BAU conditions. A semi-empirical approach is used that allows direct comparisons between GCM-based estimates and empirically derived estimates. If the climate sensitivity to greenhouse gases implies a Transient Climate Response (TCR) of ≥ 2.5 °C or an Equilibrium Climate Sensitivity (ECS) of ≥ 5.0 °C then the 2015 Paris Agreement’s target of keeping human-caused global warming below 2.0 °C will have been broken by the middle of the century under BAU. However, for a TCR < 1.5 °C or ECS < 2.0 °C, the target would not be broken under BAU until the 22nd century or later. Therefore, the current Intergovernmental Panel on Climate Change (IPCC) “likely” range estimates for TCR of 1.0 to 2.5 °C and ECS of 1.5 to 4.5 °C have not yet established if human-caused global warming is a 21st century problem. View Full-Text
Keywords: climate change mitigation; climate sensitivity; airborne fraction; Paris Agreement; climate policies; business-as-usual climate change mitigation; climate sensitivity; airborne fraction; Paris Agreement; climate policies; business-as-usual
►▼ Show Figures 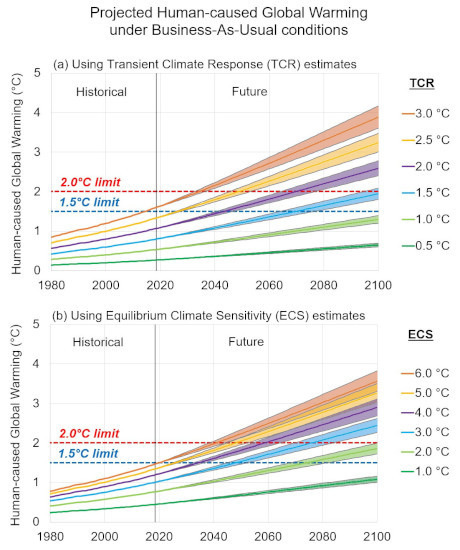