A Comparison of Dispatchable RES Technoeconomics: Is There a Niche for Concentrated Solar Power?
Previous Article in Special Issue

Estimating future streamflows is a key step in producing electricity for countries with hydroelectric plants. Accurate predictions are particularly important due to environmental and economic impact they lead. In order to analyze the forecasting capability of models regarding monthly seasonal streamflow series, we realized an extensive investigation considering: six versions of unorganized machines—extreme learning machines (ELM) with and without regularization coefficient (RC), and echo state network (ESN) using the reservoirs from Jaeger’s and Ozturk et al., with and without RC. Additionally, we addressed the ELM as the combiner of a neural-based ensemble, an investigation not yet accomplished in such context. A comparative analysis was performed utilizing two linear approaches (autoregressive model (AR) and autoregressive and moving average model (ARMA)), four artificial neural networks (multilayer perceptron, radial basis function, Elman network, and Jordan network), and four ensembles. The tests were conducted at five hydroelectric plants, using horizons of 1, 3, 6, and 12 steps ahead. The results indicated that the unorganized machines and the ELM ensembles performed better than the linear models in all simulations. Moreover, the errors showed that the unorganized machines and the ELM-based ensembles reached the best general performances. View Full-Text
Keywords: monthly seasonal streamflow series forecasting; artificial neural networks; Box-Jenkins models; ensemble monthly seasonal streamflow series forecasting; artificial neural networks; Box-Jenkins models; ensemble
►▼ Show Figures 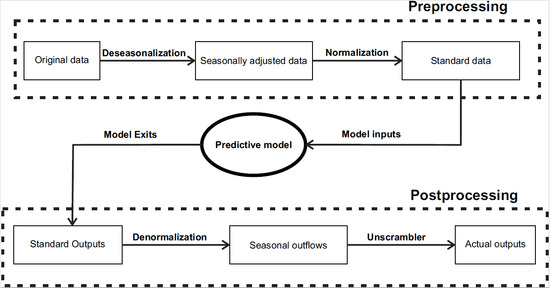