For the characteristics of overburden deformation and energy release under different mining sequences of close-distance coal seam groups, physical material similar simulation experiments were carried out, and comprehensive monitoring methods such as dial gauge, total station, micro-seismic monitor, and pressure sensor were used to test the Guangou Coal Mine. The comparative analysis of the initial mining and the upward recovery of the B4-1 coal seam is carried out to study the migration law, mine pressure distribution, and energy release characteristics of the overlying strata during W1145 mining face mining and residual coal mining. The results show that the maximum subsidence of surface and rock formation caused by re-mining of B4-1 residual coal is 0.96 m and 2.57 m respectively, which is 0.42 m and 0.47 m lower than that of W1145 working face. The boundary angle, moving angle, and rock stratum formed by the upward recovery of the remaining coal seam are 79.3°, 81.1°, and 67.5° respectively, which are smaller than the 80.9°, 82.3°, and 75.8° formed by the first mining. The cumulative development height of the fracture zone caused by upward mining is 115.7 m, which is 8.0% smaller than the cumulative development height of the downstream fracture zone of 125.8 m. When the up-level mining is carried out, the fragmentation effect of the rock layer below the key layer is strong, which makes the loosely broken rock block have a better supporting effect. Therefore, the residual coal mining time is longer than that of the first mining. The initial pressure step of the residual coal recovery is 139.2 m, and the average step of the cycle is 34.2 m, which is significantly larger than the 128.0 m and 26.0 m of the first mining. The loose rock strata that are disturbed by the upward recovery are more likely to be broken. Therefore, there are more micro-seismic events during the re-mining of the remaining coal. The B4-1 residual coals have a total of 945 incidents of re-seismic micro-seismic events, which is 292 more than the W1145 working face. After the B2 coal seam mining disturbance, the energy of some rock layers above the B4-1 coal seam is released, so that the micro-seismic energy caused by re-mining of the remaining coal seam is small. Through microseismic monitoring, it can be concluded that the accumulated energy in the process of upward re-mining of remaining coal seam is less than that in the process of downward mining of W1145 working face. Upward recovery is more likely to cause damage in the disturbed loose rock formation. Therefore, the frequency of micro-seismic events during the upward recovery is higher, and the partial energy release of the rock after the disturbance is caused, so that the source energy generated in the unit length of the upward recovery is smaller than the initial one. View Full-Text
Keywords: mining sequence; overburden migration; micro-seismic monitoring; energy release; mine pressure distribution mining sequence; overburden migration; micro-seismic monitoring; energy release; mine pressure distribution
►▼ Show Figures 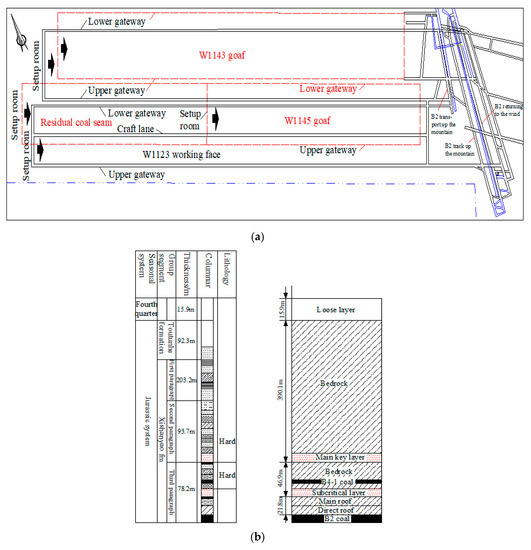