Transport and structural properties of heavily doped ceria can reveal subtle details of the interplay between conductivity and defects aggregation in this material, widely studied as solid electrolyte in solid oxide fuel cells. The ionic conductivity of heavily Gd-doped ceria samples (Ce1−xGdxO2−x/2 with x ranging between 0.31 and 0.49) was investigated by impedance spectroscopy in the 600–1000 K temperature range. A slope change was found in the Arrhenius plot at ~723 K for samples with x = 0.31 and 0.34, namely close to the compositional boundary of the CeO2-based solid solution. The described discontinuity, giving rise to two different activation energies, points at the existence of a threshold temperature, below which oxygen vacancies are blocked, and above which they become free to move through the lattice. This conclusion is well supported by Raman spectroscopy, due to the discontinuity revealed in the Raman shift trend versus temperature of the signal related to defects aggregates which hinder the vacancies movement. This evidence, observable in samples with x = 0.31 and 0.34 above ~750 K, accounts for a weakening of Gd–O bonds within blocking microdomains, which is compatible with the existence of a lower activation energy above the threshold temperature. View Full-Text
Keywords: solid oxide fuel cells (SOFCs); ionic conductivity; raman spectroscopy; powder x-ray diffraction; doped ceria solid oxide fuel cells (SOFCs); ionic conductivity; raman spectroscopy; powder x-ray diffraction; doped ceria
►▼ Show Figures 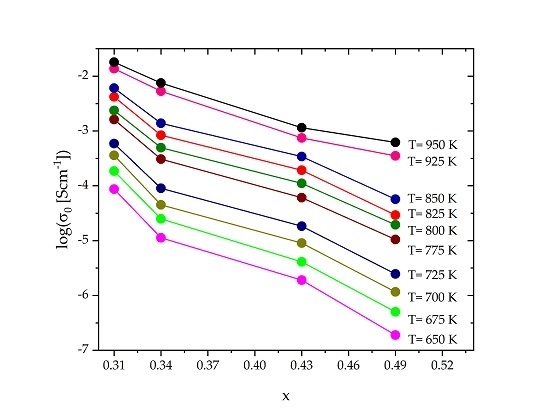