Analytical and Experimental Investigation of the Solar Chimney System

The electric arc furnace operation at the Štore Steel company, one of the largest flat spring steel producers in Europe, consists of charging, melting, refining the chemical composition, adjusting the temperature, and tapping. Knowledge of the consumed energy within the individual electric arc operation steps is essential. The electric energy consumption during melting and refining was analyzed including the maintenance and technological delays. In modeling the electric energy consumption, 25 parameters were considered during melting (e.g., coke, dolomite, quantity), refining and tapping (e.g., injected oxygen, carbon, and limestone quantity) that were selected from 3248 consecutively produced batches in 2018. Two approaches were employed for the data analysis: linear regression and genetic programming model. The linear regression model was used in the first randomly generated generations of each of the 100 independent developed civilizations. More accurate models were subsequently obtained during the simulated evolution. The average relative deviation of the linear regression and the genetic programming model predictions from the experimental data were 3.60% and 3.31%, respectively. Both models were subsequently validated by using data from 278 batches produced in 2019, where the maintenance and the technological delays were below 20 minutes per batch. It was possible, based on the linear regression and the genetically developed model, to calculate that the average electric energy consumption could be reduced by up to 1.04% and 1.16%, respectively, in the case of maintenance and other technological delays. View Full-Text
Keywords: steelmaking; electric arc furnace; consumption; electric energy; melting; refining; tapping; modeling; linear regression; genetic programming steelmaking; electric arc furnace; consumption; electric energy; melting; refining; tapping; modeling; linear regression; genetic programming
►▼ Show Figures 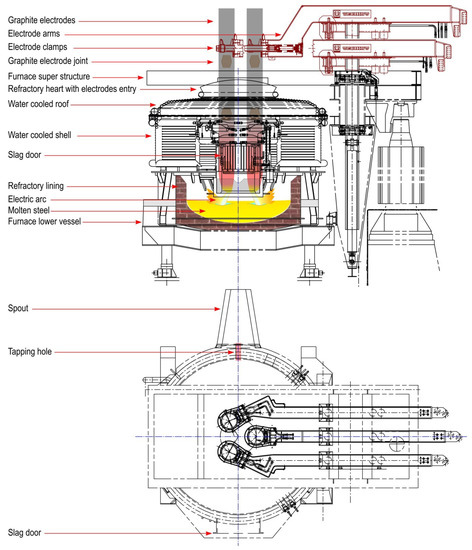