The potential for using O-methylene phosphonic κ-carrageenan (OMPk) as a filler in the chitosan-based polymer electrolyte N-methylene phosphonic chitosan (NMPC) was investigated. OMPk, a derivative of κ-carrageenan, was synthesized via phosphorylation and characterized using infrared spectroscopy (IR) and nuclear magnetic resonance (NMR). Both the IR and NMR results confirmed the phosphorylation of the parent carrageenan. The solid polymer electrolyte (SPE)-based NMPC was prepared by solution casting with different weight percentages of OMPk ranging from 2 to 8 wt %. The tensile strength of the polymer membrane increased from 18.02 to 38.95 MPa as the amount of OMPk increased to 6 wt %. However, the increase in the ionic conductivity did not match the increase in the tensile strength. The highest ionic conductivity was achieved with 4 wt % OMPk, which resulted in 1.43 × 10−5 Scm−1. The κ-carrageenan-based OMPk filler strengthened the SPE while maintaining an acceptable level of ionic conductivity. View Full-Text
Keywords: solid polymer electrolyte; chitosan; κ-carrageenan derivatives; filler; mechanical properties solid polymer electrolyte; chitosan; κ-carrageenan derivatives; filler; mechanical properties
►▼ Show Figures 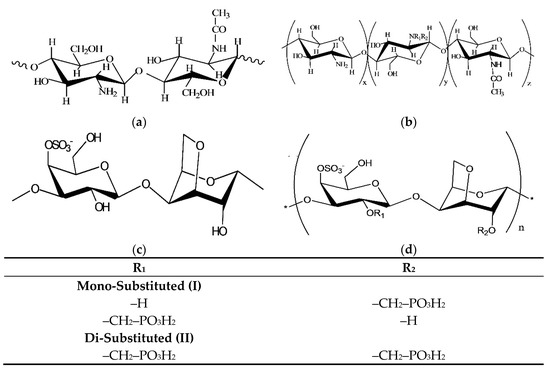