Triaxial compressive creep tests were conducted on red sandstones after different thermal treatments. Subsequently, the thermal influence on the axial, lateral and volumetric creep curves under various stress levels was analyzed. The results show that both the instantaneous and time-based deformation behaviors depended largely on the stress and temperature conditions. The instant axial strain increases linearly with increasing deviator stress and the instant deformation modulus decreases non-linearly with temperature. An interesting phenomenon was observed whereby the lateral creep strain had an apparent linear correlation with the axial creep strain. Furthermore, the fitting lines’ slopes of lateral and axial creep strain increase gradually with the increasing deviator stress at identical temperature and first decreases and then increases as temperature is elevated. Then, on the basis of the Burgers creep model and the concept of strain energy, a creep damage model implemented in FLAC3D (Fast Lagrangian Analysis of Continua 3D) is presented, and this model was able to describe the entire creep process completely including primary creep stage, secondary creep stage, and tertiary creep stage comparing with the experimental and theoretical results based on test data and numerical calculations. The influence of two damage parameters on creep curves and the thermal influence on creep parameters are subsequently discussed. Under the same stress level, the parameters K, GM and GK and ηK of creep model decrease with temperature, while the parameter ηM first augments as temperature rise to 300 °C and then decreases as temperature at above 300 °C. The higher is the temperature, the smaller the critical stress ratio (CSR). View Full-Text
Keywords: red sandstone; thermal effects; multi-step loading; Creep; damage model red sandstone; thermal effects; multi-step loading; Creep; damage model
►▼ Show Figures 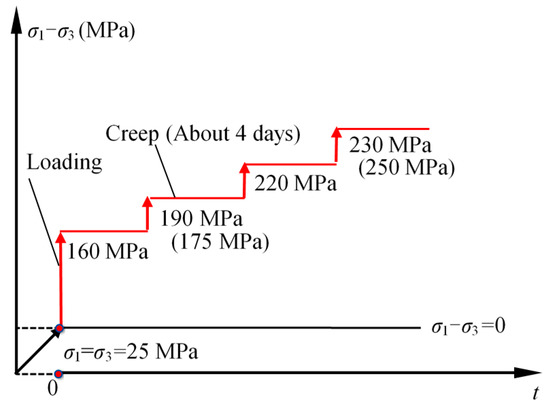