Introduction: There are a lack of established guidelines for the surveillance of high-risk cutaneous melanoma patients following initial therapy. We describe a novel approach to the development of a national expert recommendation statement on high-risk melanoma surveillance (HRS). Methods: A consensus-based, live, online voting process was undertaken at the 13th and 14th annual Canadian Melanoma Conferences (CMC) to collect expert opinions relating to “who, what, where, and when” HRS should be conducted. Initial opinions were gathered via audience participation software and used as the basis for a second iterative questionnaire distributed online to attendees from the 13th CMC and to identified melanoma specialists from across Canada. A third questionnaire was disseminated in a similar fashion to conduct a final vote on HRS that could be implemented. Results: The majority of respondents from the first two iterative surveys agreed on stages IIB to IV as high risk. Surveillance should be conducted by an appropriate specialist, irrespective of association to a cancer centre. Frequency and modality of surveillance favoured biannual visits and Positron Emission Tomography Computed Tomography (PET/CT) with brain magnetic resonance imaging (MRI) among the systemic imaging modalities available. No consensus was initially reached regarding the frequency of systemic imaging and ultrasound of nodal basins (US). The third iterative survey resolved major areas of disagreement. A 5-year surveillance schedule was voted on with 92% of conference members in agreement. Conclusion: This final recommendation was established following 92% overall agreement among the 2020 CMC attendees. View Full-Text
Keywords: cutaneous melanoma; high risk; surveillance; recommendation statement cutaneous melanoma; high risk; surveillance; recommendation statement
►▼ Show Figures 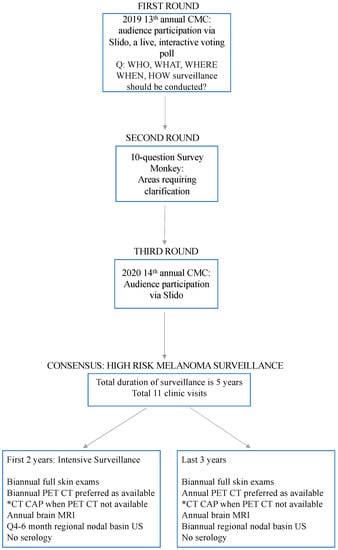