The participants of this study were second-year students enrolled in the departments of nursing at two universities, one located in Chungcheong Province and the other in Jeolla Province. The two universities were similar with respect to curricula, total number of students, and type (four-year university). Both were certified by Korean Accreditation Board of Nursing Education. The sample size was calculated using the G*Power 3.1.3 program [26], and the number of samples required for the median effect size, significance level of 0.05, power of 0.80, and four predictors was 85. In consideration of dropouts, questionnaires were distributed to 155 subjects. Participants were recruited—77 nursing students in Chungcheong Province and 78 nursing students in Jeolla Province—using convenience sampling. There were no unrecovered responses. Two questionnaires with many unanswered items were dropped, and four responses corresponding to outliers in the normality review were dropped. Finally, 149 responses were analyzed (Figure 1).

The instrument used to measure the degree of helicopter parenting was the Korean version of the helicopter parenting scale validated by Chae et al. [22]. This scale revised the Helicopter Parenting and Autonomy Supportive Behaviors tool developed for undergraduate students by Schiffrin et al. [27]. It consists of 26 questions including autonomy support, daily life hovering, school life involvement, career decision-making involvement, serve, and taste involvement. Each question is measured on a 6-point Likert scale from 1 (completely disagree) to 6 (completely agree). The measurable score ranges from 1 to 6. The higher the score, the higher the helicopter parenting level. The confidence coefficient Cronbach’s alpha was 0.71 in the previous study [22] and 0.89 in this study.

The scale used in this study was the critical thinking disposition scale for nursing students developed by Kwon et al. [13]. It consists of a total of 35 questions, with questions 11, 12, 13, 14, 15, 16, 20, 22, and 26 being reverse scored. Each item is measured on a 5-point Likert scale from 1 (completely disagree) to 5 (completely agree). The higher the score, the higher the critical thinking tendency. Cronbach’s alpha was 0.89 at the time of development [13] and 0.81 in this study.

The scale used in this study was the learning motivation scale developed by Lee et al. [1] to measure the learning motivation of undergraduate students. It consists of 32 questions that measure emotion and motivation, and each item is measured on a 5-point Likert scale from 1 (completely disagree) to 5 (completely agree). The higher the score, the higher the motivation for learning. Cronbach’s alpha was 0.76 in the scale development study [1] and is 0.94 in this study.

After obtaining approval from the W University Institutional Review Board (IRB No. WKIRB-201703-SB-014), this study conducted a self-reported questionnaire survey from October to November 2017. Data were collected from undergraduate students who did not take classes established by this researcher so as to avoid any conflicts of interest. Prior to the survey, oral and written explanations were provided about the study background and purpose, the period of participation in this study, the procedure and method, the benefits and risks of participation, personal information protection, compensation for any losses due to participation, and withdrawal of consent. Only those subjects who voluntarily agreed to participate in this study filled out a written consent form. The subjects completed the structured questionnaire by themselves, and the responses were collected immediately. It took an average of 10 min to respond to the questionnaire, and a small gift was provided to the respondents.

Table 1 presents the general characteristics of the participants in this study. The average age was 20.54 ± 2.19 years and 85.9% were female students. The degree of satisfaction with their major was 3.38 ± 0.81 points on average out of 5 points. The motive for choosing a nursing major was employment (51.7%), personal aptitude (22.1%), and acquaintance’s recommendation (19.5%).

The study was conducted according to the guidelines of the Declaration of Helsinki, and approved by the Institutional Review Board of W University (IRB No. WKIRB-201703-SB-014). 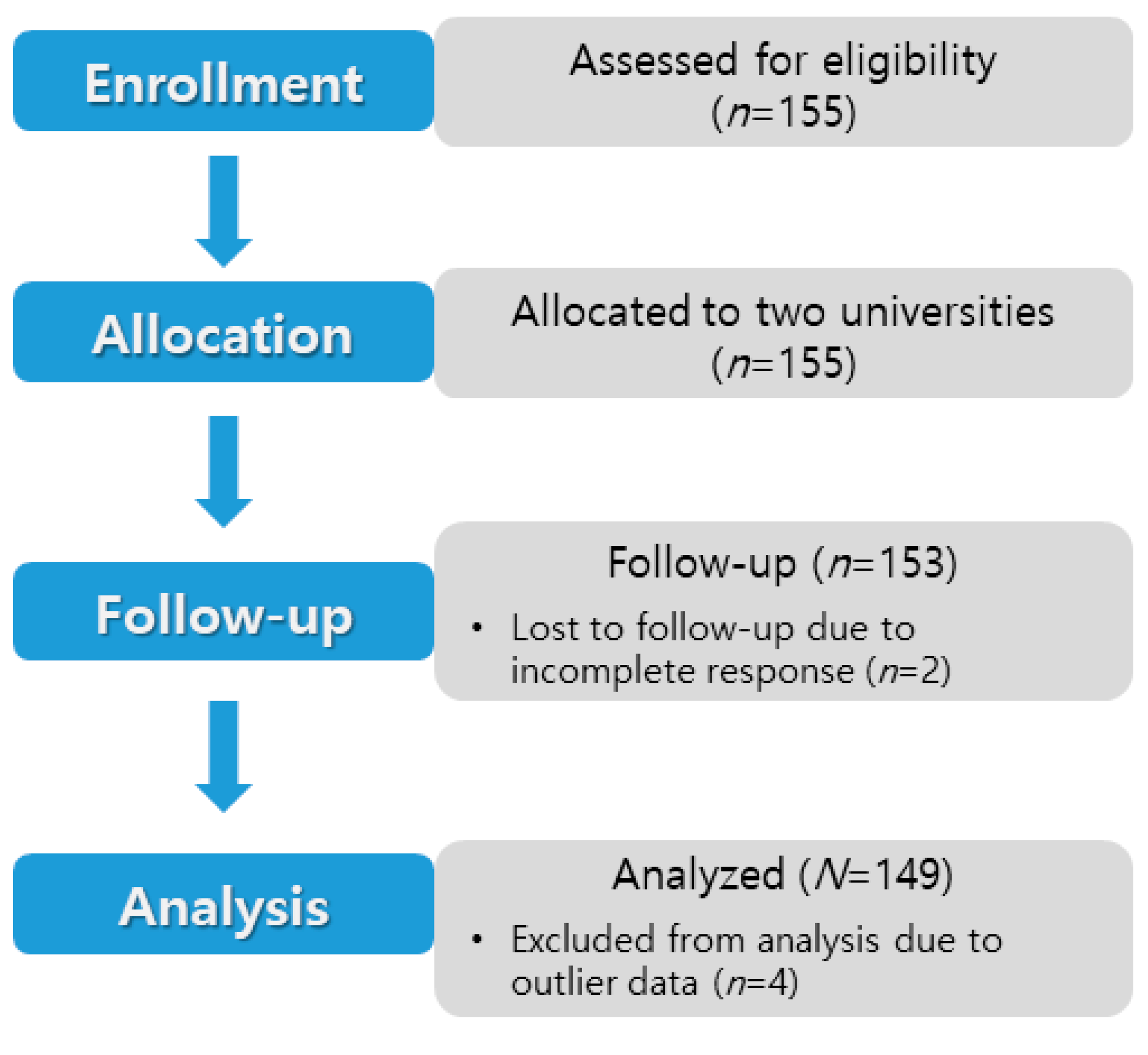