Testing of a Dual Process Model to Resolve the Socioeconomic Health Disparities: A Tale of Two Asian Countries
Next Article in Special Issue

Wellbeing Literacy: A Capability Model for Wellbeing Science and Practice

Understanding the motor patterns underlying the movement of individuals with Parkinson’s disease (PD) is fundamental to the effective targeting of non-pharmacological therapies. This study aimed to analyze the gait pattern in relation to the evolutionary stages I–II and III–IV according to the Hoehn and Yahr (H&Y) scale in individuals affected by PD. The study was conducted with the participation of 37 PD patients with a mean age of 70.09 ± 9.53 years, and of whom 48.64% were women. The inclusion criteria were (1) to be diagnosed with PD; (2) to be in an evolutionary stage of the disease between I and IV: and (3) to be able to walk independently and without any assistance. Kinematic and spatial-temporal parameters of the gait were analyzed. The results showed differences in speed of movement, cadence, stride length, support duration, swing duration, step width, walking cycle duration, and double support time between the stages analyzed. These results confirmed the differences in PD gait pattern between stages I–II and III–IV. Different behaviors of the same variable were recorded depending on whether the right or left side was affected by PD. View Full-Text
Keywords: locomotion disorder; cadence; gait oscillation; speed of movement; neurodegenerative disease locomotion disorder; cadence; gait oscillation; speed of movement; neurodegenerative disease
►▼ Show Figures 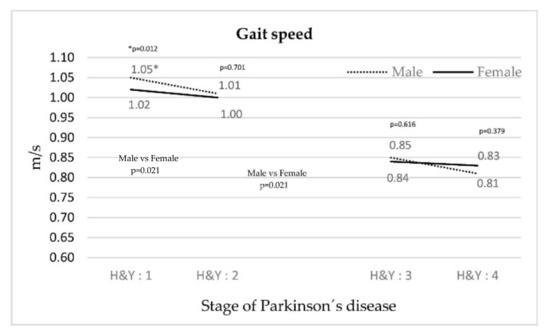