The Relationship between the Family Functioning of Individuals with Drug Addiction and Relapse Tendency: A Moderated Mediation Model

Predictors of New Dementia Diagnoses in Elderly Individuals: A Retrospective Cohort Study Based on Prefecture-Wide Claims Data in Japan

Preventing dementia in elderly individuals is an important public health challenge. While early identification and modification of predictors are crucial, predictors of dementia based on routinely collected healthcare data are not fully understood. We aimed to examine potential predictors of dementia diagnosis using routinely collected claims data. In this retrospective cohort study, claims data from fiscal years 2012 (baseline) and 2016 (follow-up), recorded in an administrative claims database of the medical care system for the elderly (75 years or older) in Niigata prefecture, Japan, were used. Data on baseline characteristics including age, sex, diagnosis, and prescriptions were collected, and the relationship between subsequent new diagnoses of dementia and potential predictors was examined using multivariable logistic regression models. A total of 226,738 people without a diagnosis of dementia at baseline were followed. Of these, 26,092 incident dementia cases were detected during the study period. After adjusting for confounding factors, cerebrovascular disease (odds ratio, 1.15; 95% confidence interval, 1.11–1.18), depression (1.38; 1.31–1.44), antipsychotic use (1.40; 1.31–1.49), and hypnotic use (1.17; 1.11–1.24) were significantly associated with subsequent diagnosis of dementia. Analyses of routinely collected claims data revealed neuropsychiatric symptoms including depression, antipsychotic use, hypnotic use, and cerebrovascular disease to be predictors of new dementia diagnoses. View Full-Text
Keywords: claims data; dementia; medical care system for the elderly; predictors; prescription claims data; dementia; medical care system for the elderly; predictors; prescription
►▼ Show Figures 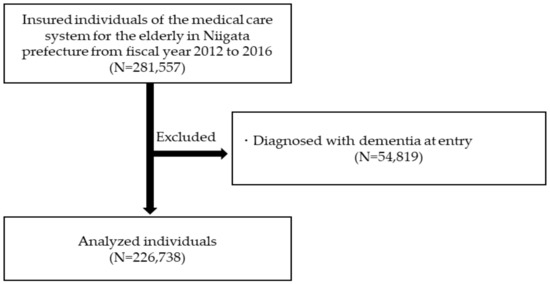