Future Challenges for Physical Therapy during and after the COVID-19 Pandemic: A Qualitative Study on the Experience of Physical Therapists in Spain
Next Article in Special Issue

A Longitudinal Analysis of Alcohol Use Behavior among Korean Adults and Related Factors: A Latent Class Growth Model
Previous Article in Journal

Secondary Analysis of a Study on Exercise Therapy in Hip Osteoarthritis: Follow-Up Data on Pain and Physical Functioning
Previous Article in Special Issue

Cigarette Prices and Smoking Behavior in Israel: Findings from a National Study of Adults (2002–2017)

Tobacco taxation and price policies are considered the most effective for lowering demand for tobacco products. While this statement is based on research from numerous countries, scant evidence exists on this topic for Israel. Accordingly, we assessed the association between cigarette prices and smoking prevalence and intensity from a national sample of adults in Israel (2002–2017). Data on smoking behavior were derived from the Israeli Knowledge Attitudes and Practices (KAP) survey, a repeated cross-sectional survey. Price information is from the Economist Intelligence Unit (EIU) since it was not collected in the KAP survey. We used the price of a pack of 20 cigarettes for Marlboro and the local brand. These two price variables were the primary independent variables, and we adjusted for inflation. The dependent variables were current smoking (yes/no) and smoking intensity, defined as the number of cigarettes smoked per week. Multivariable analysis was employed using a two-part model while adjusting for covariates. The first step of the model utilized logistic regression with current smoking as the dependent variable. The second step examining smoking intensity as the dependent variable, used OLS regression. Price elasticity was estimated as well. Analysis revealed that a one-unit increase (Israeli currency) in the price of local brand of cigarettes was related to 2.0% (OR = 0.98; 95%CI 0.98, 0.99) lower odds of being a current smoker, adjusting for covariates including household income. Moreover, a one unit increase in the price of the local brand of cigarettes was related to consuming 1.49 (95% CI −1.97, −1.00) fewer weekly cigarettes, controlling for household income and covariates. Similar results were found with the Marlboro cigarette prices. The total price elasticity of cigarette demand, given by the sum of price elasticities of smoking prevalence and intensity, showed that a 10.0% increase in the price is associated with a 4.6–9.2% lower cigarette consumption among Israeli adults. Thus, increasing cigarette prices will likely lead to a reduction in cigarette smoking thereby improving public health in Israel. View Full-Text
Keywords: cigarette prices; smoking; adults; Israel cigarette prices; smoking; adults; Israel
►▼ Show Figures 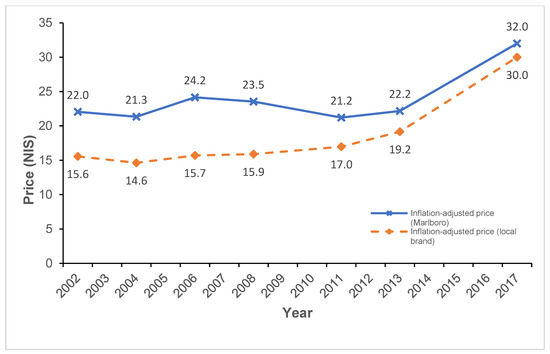