Should I Stay or Should I Go? The Impact of Social Networks on the Choice to Play for a National Team in Football
Next Article in Special Issue

Persistent Misperceptions about Nicotine among US Physicians: Results from a Randomized Survey Experiment

We conducted a survey experiment among US physicians to evaluate whether question wording impacted perceptions about the health effects of nicotine. 926 physicians were randomized to receive one of two versions of a question matrix that asked about the “extent to which they agree or disagree that ‘nicotine’ (Version 1) or ‘nicotine, on its own,’ (Version 2) directly contributes to” birth defects, cardiovascular disease (CVD), cancer, depression, and chronic obstructive pulmonary disease (COPD). We evaluated whether question condition predicted strong agreement and/or agreement with each statement, and assessed demographic correlates of each outcome while adjusting for question version. Physicians who received Version 2 were less likely to “strongly agree” that nicotine directly caused birth defects (Prevalence Ratio (PR) 0.84, 95% CI 0.72–0.98), CVD (PR 0.89, 95% CI 0.84–0.95), cancer (PR 0.81, 95% CI 0.75–0.87), and COPD (PR 0.78, 95% CI 0.72–0.84). Females were more likely to “strongly agree” that nicotine directly contributes to birth defects and cancer, and family physicians were most likely to “strongly agree” that nicotine directly contributes to CVD, cancer, and COPD. Question wording is important when measuring physicians’ beliefs about nicotine; however, even after accounting for question version, misperceptions about the direct health effects of nicotine were common and varied by sex and specialty. View Full-Text
Keywords: nicotine; perceptions; survey; physicians nicotine; perceptions; survey; physicians
►▼ Show Figures 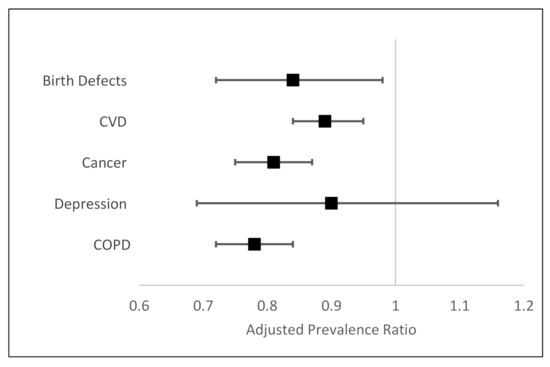