Implementing a Care Pathway for Complex Chronic Patients from a Nursing Perspective: A Qualitative Study
Previous Article in Special Issue

Deborah A. Marshall
2,7 and

Sport-related injuries are the leading cause of injury in youth and are costly to the healthcare system. When body checking is disallowed in non-elite levels of Bantam (ages 13–14 years) ice hockey, the injury rate is reduced, but the impact on costs is unknown. This study compared rates of game injuries and costs among non-elite Bantam ice hockey leagues that disallow body checking to those that did not. Methods: An economic evaluation was conducted alongside a prospective cohort study comparing 608 players from leagues where body checking was allowed in games (Calgary/Edmonton 2014–2015, Edmonton 2015–2016) with 396 players from leagues where it was not allowed in games (Vancouver, Kelowna 2014–2015, Calgary in 2015–2016). The effectiveness measure was rate of game injuries per 1000 player-hours. Costs were estimated based on associated healthcare use within the publicly funded healthcare system as well as privately paid healthcare costs. Probabilistic sensitivity analysis was conducted using bootstrapping. Results: Disallowing body checking reduced the rate of injuries by 4.32 per 1000 player-hours (95% CI −6.92, −1.56) and reduced public and total healthcare system costs by $1556 (95% CI −$2478, −$559) and $1577 (95% CI −$2629, −$500) per 1000 player-hours, respectively. These finding were robust in over 99% of iterations in sensitivity analyses in the public healthcare and the total healthcare system perspectives. There was no statistically significant difference in privately paid healthcare costs (−$65 per 1000 player-hours (95% CI −$220, $99)). Interpretation: Disallowing body checking in non-elite 13–14-year-old ice hockey nationally would prevent injuries and reduce public healthcare costs. View Full-Text
Keywords: economic evaluation; injury prevention; body checking policy; hockey; youth economic evaluation; injury prevention; body checking policy; hockey; youth
►▼ Show Figures 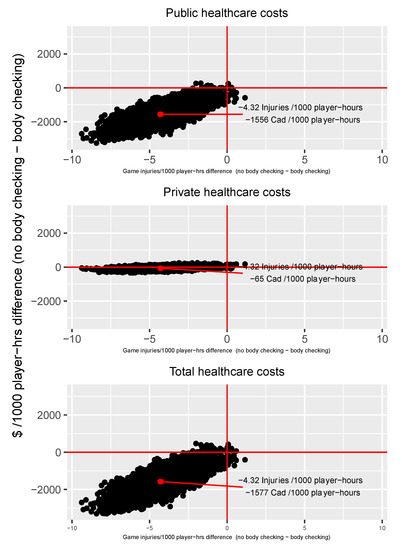