Effects of Monopolar Dielectric Radiofrequency Signals on the Symptoms of Fibromyalgia: A Single-Blind Randomized Controlled Trial

Monopolar dielectric radiofrequency (MDR) is a non-invasive treatment for pain based on the local application of electromagnetic signals. The study’s goal was to analyze the effects of MDR on the symptoms of fibromyalgia. For this aim, a randomized controlled trial was conducted on 66 female participants (aged 47 ± 17.7) diagnosed with fibromyalgia. Participants were randomly allocated to either an experimental group (n = 23), which received eight 20-minute sessions of MDR; a sham group, which received the same number of sessions of a sham MDR therapy (n = 22); or a control group (n = 21), which received usual care. The outcome variables included pain measured by the visual analogue scale (VAS), score on the hospital anxiety and depression scale (HADS) and quality of life measured by the combined index of fibromyalgia severity (ICAF). A large effect size was observed for the local pain (R2 = 0.46), total ICAF (R2 = 0.42) and ICAF physical factor scores (R2 = 0.38). Significant mean differences were found for the local pain (p = 0.025) and ICAF physical factor (p = 0.031) scores of the experimental group in comparison with the sham group. No statistically significant differences between groups were found in HADS. In conclusion, MDR is more effective than either sham treatment or usual care in the short-term improvement of pain and the physical wellbeing of participants with fibromyalgia. View Full-Text
Keywords: electromagnetic radiation; fibromyalgia; quality of life; pain electromagnetic radiation; fibromyalgia; quality of life; pain
►▼ Show Figures 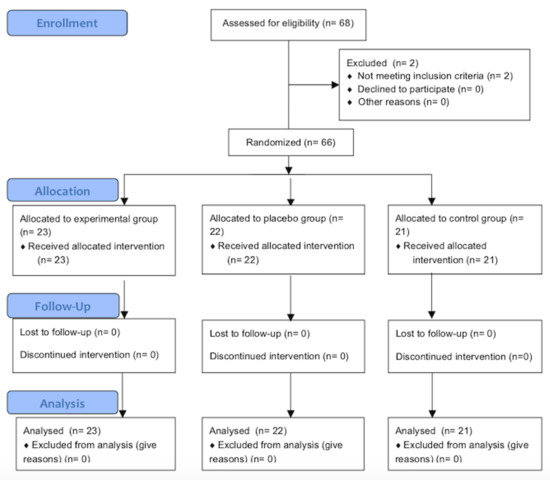