Saved by Wealth? Income, Wealth, and Self-Perceived Health in Spain during the Financial Crisis
Previous Article in Special Issue

The aim of this study was to analyze the distribution and effectiveness of the different types of smash in professional padel according to the area and direction of the strokes and the gender. Through systematic observation, 1.015 smashes from eight finals (four men’s and four women’s) of the professional matches were analyzed. The smashes were categorized into four types of smash: tray, flat, topspin and off the wall. The results showed both men’s and women’s that the tray is the most used smash by padel players, presenting a percentage of point continuity of almost 90%. The flat and topspin smashes are the strokes that achieve the highest percentage of winning points (near 60%), although this efficiency decreases significantly when the players move away from the net area (p < 0.05), especially in the flat smash. Men perform a higher percentage of winning smashes than women, mainly in the flat smash (p = 0.02). Furthermore, with regards to direction, flat and off the wall smashes are predominantly down the line strokes and women perform significantly more cross court topspin smashes than men (p = 0.005). The results shown could be used to design tasks and exercises by padel coaches at professional players. View Full-Text
Keywords: racket sports; technique; performance analysis; tactics racket sports; technique; performance analysis; tactics
►▼ Show Figures 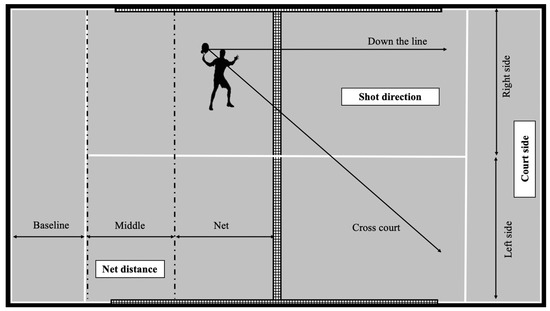