Infectious or Recovered? Optimizing the Infectious Disease Detection Process for Epidemic Control and Prevention Based on Social Media
Next Article in Special Issue

Disparities in Dental Service Utilization among Adults in Chinese Megacities: Do Health Insurance and City of Residence Matter?
Previous Article in Special Issue

Physical Activity Changes and Its Risk Factors among Community-Dwelling Japanese Older Adults during the COVID-19 Epidemic: Associations with Subjective Well-Being and Health-Related Quality of Life

Physical education (PE) has the potential to promote health-related fitness, however, its contribution is still not clear. The aim of this study was to assess whether students’ health-related cardiorespiratory fitness (CRF) improved from the beginning to the end of the school year, and to examine the role of PE class intensity and habitual physical activity (PA) in promoting students’ CRF. This observational study employed a longitudinal design. Participants were 212 7th and 8th grade students (105 boys), mean age 12.9 years old, followed during one school year, from September 2017 to June 2018. The Progressive Aerobic Cardiovascular Endurance Run (PACER) was used to assess CRF at baseline and follow-up. PA was measured using accelerometers. PE class intensity was assessed using the System for Observing Fitness Instruction Time. Findings indicated that from the beginning to the end of the school year, a greater percentage of participants were in the CRF healthy fitness zone (73.1% to 79.7%, p = 0.022). Among boys, participating in organized sports (B = 4.61, 95% confidence interval [CI]: 0.33, 8.88) and the percentage of PE time being very active (B = 0.90, 95% CI: 0.44, 1.35) were positively associated with the change in PACER laps. Among girls, daily vigorous PA (B = 0.38, 95% CI: 0.15, 0.60) and participating in organized sports (B = 4.10, 95% CI: 0.93, 7.27) were also positively associated with PACER change, while being overweight or obese (B = −5.11, 95% CI: −8.28, −1.93) was negatively associated. In conclusion, PE was demonstrated to have a positive role in the promotion of CRF, especially among boys, while for girls, habitual PA seems to have a greater contribution. Nevertheless, results and conclusions should be considered carefully, taking into account study limitations, such as the non-direct measures of PE class intensity, CRF, and school setting. View Full-Text
Keywords: aerobic fitness; children; PACER; school; 20-m shuttle run aerobic fitness; children; PACER; school; 20-m shuttle run
►▼ Show Figures 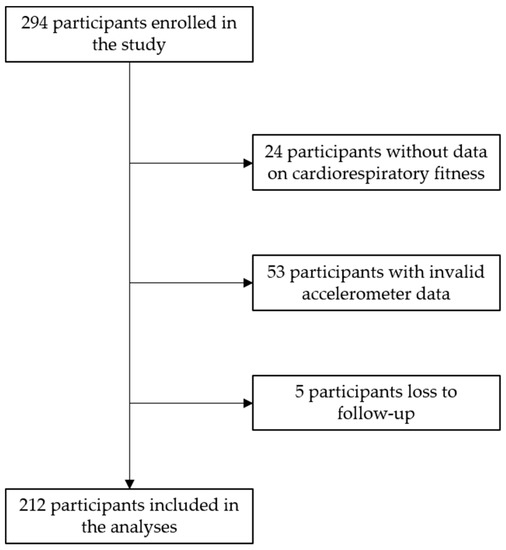