Attributable Risk to Assess the Health Impact of Air Pollution: Advances, Controversies, State of the Art and Future Needs
Next Article in Special Issue

The aim was to compare the clinical outcomes and prognostic factors of cervical cancer between elderly and younger women, and to explore which treatment strategy is more appropriate for elderly patients. We retrospectively reviewed patients with cervical cancer receiving definitive radiotherapy (RT) between 2007 and 2016, and divided them into two age groups: age < 70 vs. age ≥ 70. The clinical outcomes were compared between the two age groups. The median follow-up was 32.2 months. A total of 123 patients were eligible, 83 patients in group 1 (age < 70), and 40 patients in group 2 (age ≥ 70). Patients in group 2 received less intracavitary brachytherapy (ICRT) application, less total RT dose, and less concurrent chemoradiotherapy (CCRT), and tended to have more limited external beam radiotherapy (EBRT) volume. The treatment outcomes between the age groups revealed significant differences in 5-year overall survival (OS), but no differences in 5-year cancer-specific survival (CSS), 66.2% vs. 64.5%, and other loco-regional control. In multivariate analyses for all patients, the performance status, pathology with squamous cell carcinoma (SCC), International Federation of Gynecology and Obstetrics (FIGO) stage, and ICRT application were prognostic factors of CSS. The elderly patients with cervical cancer had comparable CSS and loco-regional control rates, despite receiving less comprehensive treatment. Conservative treatment strategies with RT alone could be appropriate for patients aged ≥ 70 y/o, especially for those with favorable stages or histopathology. View Full-Text
Keywords: cervical cancer; elderly; radiotherapy cervical cancer; elderly; radiotherapy
►▼ Show Figures 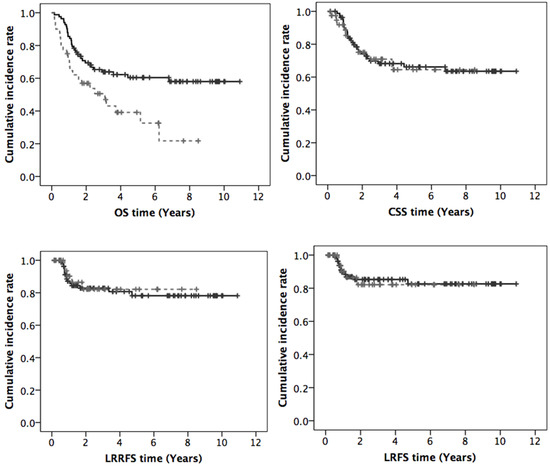