The Psychometric Characteristic of the Taekwondo Electronic Protector Cognition Scale: The Application of the Rasch Model
Previous Article in Journal

Hypertension-Related Knowledge, Attitudes, and Behaviors among Community-Dwellers at Risk for High Blood Pressure in Shanghai, China

This study aimed to investigate the hypertension-related knowledge, attitudes, behaviors (KAB), and socio-demographic determinants among community-dwellers who were at risk for hypertension in Shanghai, China. A cross-sectional survey was conducted in a district of Shanghai in 2017 using multi-stage cluster sampling, including 611 participants who were at risk for hypertension. Questionnaires were used to investigate KAB regarding hypertension prevention. Multivariable logistic regression was performed to examine the relationship between socio-demographic factors and hypertension-related KAB. The results indicated that more than 75% of the study population had accurate knowledge, but only 48.4% knew the Recommended Daily Intake of salt for adults; over 80% formed health beliefs, while less than 50% were keeping a healthy diet, maintaining regular physical activity and/or bodyweight control. Better knowledge was found in the below 60 age group (p < 0.01) and the 60–69 age group (p = 0.03) than in the ≥70 age group. The behaviors in females (p < 0.01) were better than in males and were better in those covered by the Urban Employee Basic Medical Insurance (p = 0.01) than in those with the New Rural Cooperative Medical Insurance. In conclusion, although the rates of accurate knowledge and belief of hypertension prevention were high in the study population, the rates of maintaining healthy behaviors were relatively low. Socio-demographic factors had important influences on hypertension-related KAB. Further health education and intervention of hypertension prevention was needed to improve their level of KAB and reduce their risk for hypertension among the target groups. View Full-Text
Keywords: population at risk for hypertension; knowledge-attitude-behavior; Eastern China; influencing factors population at risk for hypertension; knowledge-attitude-behavior; Eastern China; influencing factors
►▼ Show Figures 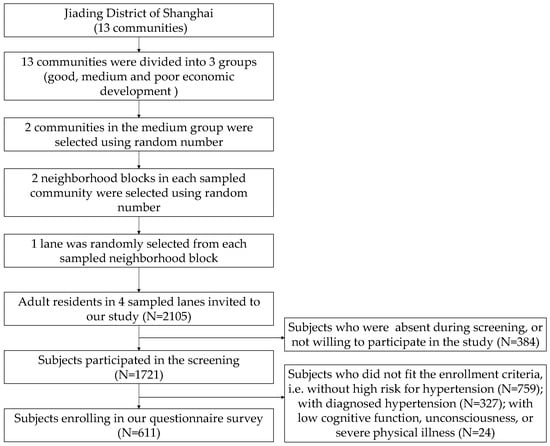