The Association of Periodontal Treatment and Decreased Pneumonia: A Nationwide Population-Based Cohort Study

The oral environment is a very complex microenvironment consisting of multiple bacteria and their associated biofilms which can start a series of immune inflammatory reactions leading to the destruction of the periodontium [1]. Multiple infections resulting from poor oral health could also evoke a systemic response [2]. Many studies have provided scientific evidence suggesting that periodontitis could affect an individual systemically, contributing to cardiovascular disease [3], diabetes [4], and respiratory disease [5].
Pneumonia is a common respiratory infectious disease of the pulmonary parenchyma caused by bacteria, mycoplasma, viruses, fungi, or parasites. Bacterial pneumonia is a common and significant cause of mortality and morbidity in human populations [6]. Pneumonia has been the third most common cause of death in Taiwan in 2018 [7]. Dental biofilms and periodontal inflammation appear to be risk factors for the development and/or progression of pneumonia [8]. In addition, studies have reported that respiratory pathogens preferentially colonize the teeth or dentures rather than soft tissue in the oral cavity [9,10]. This indicates that dental biofilm acts as a reservoir for respiratory pathogens. Therefore, oral interventions aimed at reducing the bacteria count may result in a reduced incidence of pneumonia.
However, there is limited information on whether periodontal treatment could reduce pneumonia risk. We hypothesized that chronic periodontitis patients with periodontal treatment have a lower risk of developing pneumonia than the general population. In this study, we conducted a nationwide population-based study using the Taiwanese National Health Research Insurance database (NHIRD) to investigate the impact of periodontal treatment on pneumonia risk, with a cohort study design.

The compulsory National Health Insurance program, which has operated since 1995, enrolled nearly the whole Taiwanese population in 2014 [11]. The Longitudinal Health Insurance Database 2010 (LHID2010), a part of the NHIRD, was used in this cohort study. LHID2010 comprises 1,000,000 randomly sampled beneficiaries enrolled from the National Health Insurance (NHI) program in 2010. Collected data such as registration information and dental and medical records on these individuals were described previously [12,13,14]. The NHIRD identifies diseases on the basis of the International Classification of Diseases, Ninth Revision, Clinical Modification (ICD-9-CM). The accuracy and validity of NHIRD diagnosis codes have been documented. This study was approved by the Chung Shan Medical University Hospital institutional review board (CS2-15071). This study also complies with the guidelines of strengthening the reporting of observational studies in epidemiology (STROBE).

The baseline variables included age, gender, monthly income, urbanization, and comorbidities. The monthly income data used a NT $20,000 interval to distinguish income levels according to the basic wage (NT $19,047) announced by the Ministry of Labor in 2013 [15]. Therefore, monthly income was categorized as follows: <NT $20,000, NT $20,000 to NT $40,000, and >NT $40,000. The degree of urbanization was clustered into urban, suburban, and rural based on population density, the population ratio of people with college-or-above educational levels, the population ratio of elderly people over 65 years old, the population ratio of agriculture workers, and the number of physicians per 100,000 people [16]. The comorbidities included hypertension (ICD-9-CM: 401–405), hyperlipidemia (ICD-9-CM: 272.0–272.4), diabetes (ICD-9-CM: 250), chronic obstructive pulmonary disease (ICD-9-CM: 490–496), chronic kidney disease (ICD-9-CM: 585), and stroke (ICD-9-CM: 430–438). Those comorbidities were defined before the index date within one year.
The comparison cohort was then frequency-matched according to age and gender at a 1:2 ratio in order to provide the same index date for both groups. During matching, we excluded patients who received a diagnosis of pneumonia before the index date. Moreover, propensity score matching (1:1) was performed for the comparison group according to age, gender, monthly income, urbanization, hypertension, hyperlipidemia, diabetes, chronic obstructive pulmonary disease, chronic kidney disease, and stroke. The propensity score was a probability that was calculated from logistic regression. By matching the propensity score, the difference in disease severity between the two groups could be reduced. The flow chart of case selection and exclusion is shown in Figure 1.

The outcome was defined as newly diagnosed pneumonia (ICD-9-CM: 481, 482, 483, 485, and 486) from emergencies or hospitalization to confirm the accuracy of diagnosis. All patients were traced until the occurrence of pneumonia, withdrawal from the social insurance system, or the end of 2013, whichever came first.

The Student’s t-test and Chi-square test were used to compare the demographic and clinical characteristics of patients with periodontal treatment with those of the comparison groups. The Kaplan–Meier analysis was used to plot the cumulative incidence of pneumonia. The log-rank test was used to compare differences between these two cohorts. The Cox proportional hazard models were applied to estimate the hazard ratios and 95% confidence intervals of periodontal treatment. All statistical analyses were performed using SPSS version 18 (SPSS, IBM, Chicago, IL, USA). The level of statistical significance was set at p < 0.05.

Although several studies have reported the association of periodontal disease and pneumonia [17,18,19], little is known about the relationship between periodontal treatment and pneumonia risk. To the best of our knowledge, this is the first nationwide population-based cohort study reporting that the risk of pneumonia in patients who received periodontal treatment was lower than in the untreated group. Similar results were found by Yoneyama et al. who reported that intervention promoting oral hygiene could reduce pneumonia in elder inpatients and patients in nursing homes [20]. Recently, intensive periodontal treatment was associated with a 29% reduction in the risk of hospitalization for pneumonia in hemodialysis patients [21]. These data demonstrate that dental prophylaxis is very important for the reduction of pneumonia.
The oral cavity is an important source of bacteria that cause infections of the respiratory system. The connection of periodontal diseases and pneumonia might result from the colonization of pathogenic bacteria present in dental biofilm [22], followed by aspiration of the colonized pathogens, which is considered a significant risk factor for pneumonia [23,24]. Various respiratory pathogens such as Staphylococcus aureus, Pseudomonas aeruginosa, Acinetobacter baumannii, and Enterobacter cloacae were found in the dental biofilm of susceptible individuals [25,26,27]. In addition, many periodontal bacteria species have been cultured from infected lung fluids such as Porphyromonas gingivalis, Eikenella corrodens, Fusobacterium nucleutum, and Actinomyces [28,29]. These findings are a direct evidence of the positive association between periodontal disease and pneumonia. Therefore, dental biofilm could serve as an important reservoir of respiratory pathogens.
The monthly income and urbanization of the locations of NHI registration were used as a proxy parameter for socioeconomic status. It is not surprising that our results found that higher income and level of urbanization were associated with a relatively lower risk of pneumonia. This might be due to the larger availability of dental service and favorable patients’ attitudes toward periodontal treatment in those areas. These factors would influence people’s utilization of the NHI in Taiwan. However, further assessments such as through questionnaires and surveys are required.
Poor oral hygiene in dentate patients was found to cause significantly higher salivary bacterial counts than in individuals with good oral hygiene [30]. Poor oral hygiene could increase the complexity and mass of the dental biofilm, enhancing further interactions between oral and respiratory pathogens [31]. In clinical dentistry, scaling, root planing, and flap surgery with oral hygiene instruction are the guidelines for regular periodontal treatment. These procedures can effectively remove dental biofilm and calculus from teeth surfaces and reduce inflammatory conditions, improving periodontal health. This may explain why periodontal treatment could reduce the risk of pneumonia in this study. Moreover, intensive periodontal treatment such as root planing and flap surgery were revealed to be more powerful in lowering the pneumonia risk than dental prophylaxis by scaling.
The strengths of this study are the use of a large, longitudinal sample size to evaluate the pneumonia risk in the periodontal treatment and comparison groups. The cohort study design used could confer a higher level of evidence to demonstrate a causal relationship between periodontal treatment and the decrease of the risk of pneumonia.
However, some potential limitations of this observational study should be addressed. First, this study was not a prospective, randomized study of chronic periodontitis patients who did or did not receive adequate periodontal treatment. Future study with controlled interventions is required. Second, we are uncertain about the periodontal health status of the comparison cohort due to this being a register-based study. Only individuals sought for dental prophylaxis and periodontal treatment could be recruited in the NHI system. Therefore, the exclusion of patients with any gingival and periodontal disease from 2000 to 2013 in the comparison group could reduce the selection bias and avoid the confounding variates. This is the reason why we chose individuals without periodontal diseases diagnoses (ICD-9-CM code 523) as the comparison cohort. Thirdly, the contributions of smoking habits, alcohol use, family history, or nutrition status factors could not be investigated using LHID2010. Fourthly, all of the diagnoses used ICD-9-CM codes in the NHIRD. Ventilator-associated pneumonia is a major infection in hospitals. The severity, pathogens, or causes of pneumonia were not reported in this database. Fifthly, the definitive code of aspiration pneumonia was included in ICD-9; however, aspiration pneumonia is a dynamic disease, and we could not distinguish between aspiration pneumonia and infectious pneumonia from the claims-based insurance database. These may compromise our findings and result in an inadequate adjustment of confounding factors. Finally, in this study, the majority of the participants were Taiwanese. It still remains uncertain whether the findings could be generalized to other ethnic groups. 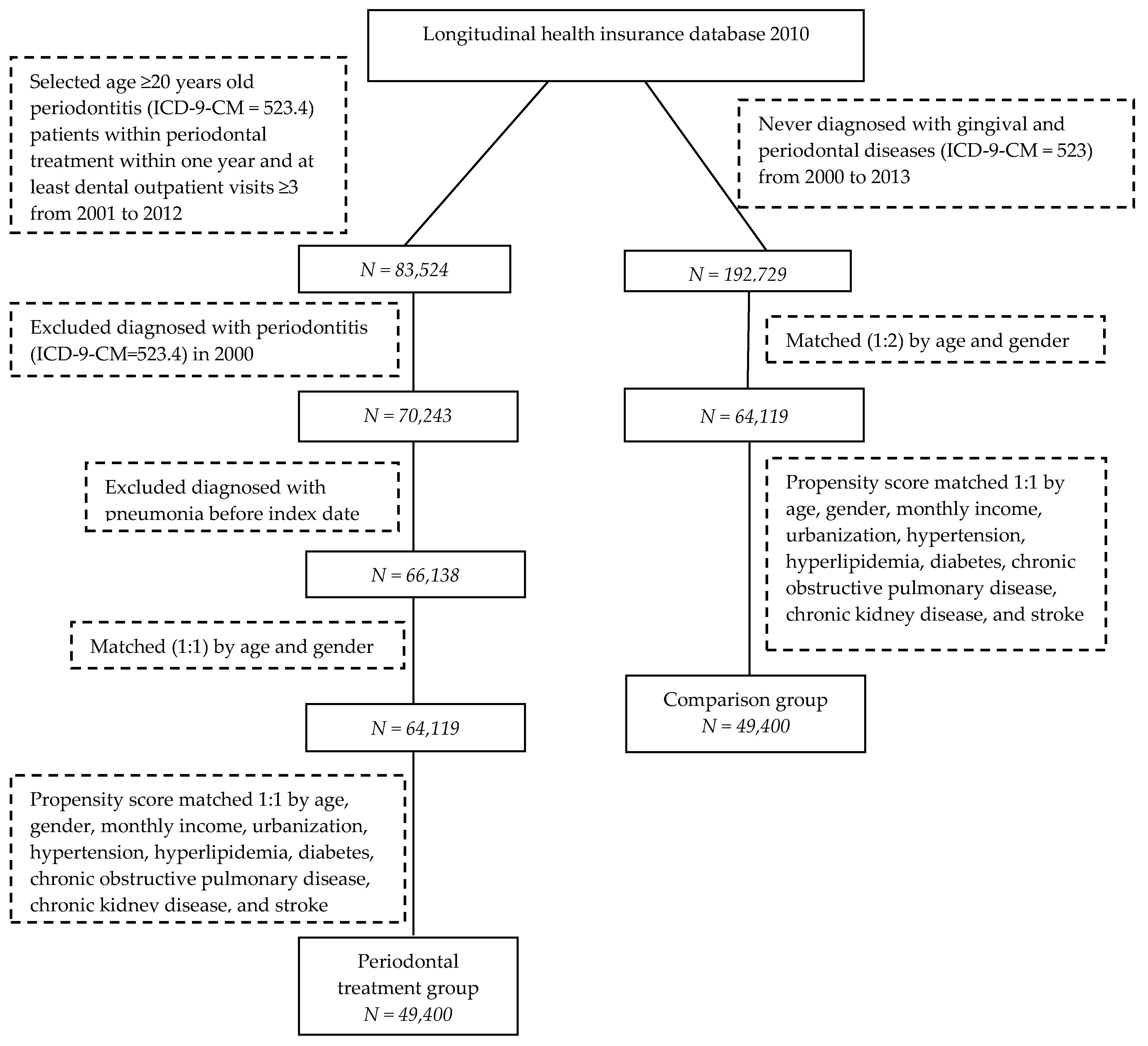