Social Inequalities in Environmental Noise Exposure: A Review of Evidence in the WHO European Region

The Little Bighorn River is the primary source of water for water treatment plants serving the local Crow Agency population, and has special significance in the spiritual and ceremonial life of the Crow tribe. Unfortunately, the watershed suffers from impaired water quality, with high counts of fecal coliform bacteria routinely measured during run-off events. A metagenomic analysis was carried out to identify potential pathogens in the river water. The Oxford Nanopore MinION platform was used to sequence DNA in near real time to identify both uncultured and a coliform-enriched culture of microbes collected from a popular summer swimming area of the Little Bighorn River. Sequences were analyzed using CosmosID bioinformatics and, in agreement with previous studies, enterohemorrhagic and enteropathogenic Escherichia coli and other E. coli pathotypes were identified. Noteworthy was detection and identification of enteroaggregative E. coli O104:H4 and Vibrio cholerae serotype O1 El Tor, however, cholera toxin genes were not identified. Other pathogenic microbes, as well as virulence genes and antimicrobial resistance markers, were also identified and characterized by metagenomic analyses. It is concluded that metagenomics provides a useful and potentially routine tool for identifying in an in-depth manner microbial contamination of waterways and, thereby, protecting public health. View Full-Text
Keywords: metagenomics; pathogen detection; waterborne disease metagenomics; pathogen detection; waterborne disease
►▼ Show Figures 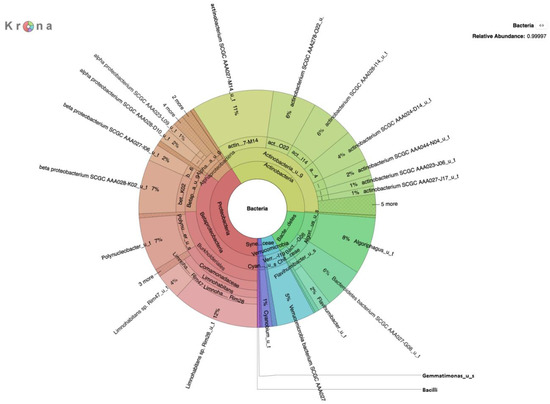